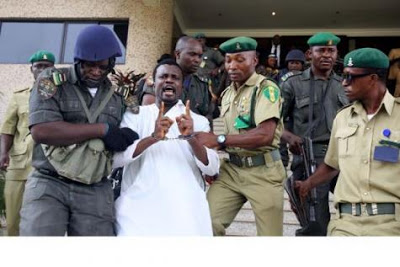 Edmund Ebiware, convicted for foreknowledge of the October 1, 2010 Abuja bomb blast that killed 12 people, has been given a nod to appeal his sentence. He got the go ahead on Monday, his lawyers from Festus Keyamo Chambers.

Mr. Ebiware was sentenced to life in prison in 2013 after an Abuja court found him guilty of a three-count charge including having foreknowledge of plans to carry out the bombing without alerting the authorities.

Former leader of the Movement for the Emancipation of the Niger Delta, Henry Okah, was convicted for the bombing in a South African court in March 2013. Mr. Okah got a 24 years jail term.

The court said it was convinced Mr. Ebiware was an accessory to Mr. Okah in carrying out the bombing.

“Anyone who is aware of an act of terrorism but fails to report same to the President, a Governor, Security agent or a Peace Officer in order to prevent the commission of the crime, is liable to a life imprisonment,” Justice Gabriel Kolawole said in his judgement.

The convict is currently serving his life sentence under solitary confinement in Kuje Prison. But his wife, Ify, who is raising their two kids said she’s confident she would upturn the judgement at the appeal court.

“My husband is totally innocent,” she said. “I know him more than anyone. Even the kids can attest that he is the best dad in the world.”

She argued that committing her husband to life in prison over accusations that he had prior knowledge of the bombing was unjust.

“He was sentenced without a single evidence. When the court asked for evidence, they said it was a national security matter that could not be tendered before the court,” she said.

Mrs. Ebiwere is confident she would prove at the appeal that her husband never met Mr. Okah. She admitted her husband had contacted Mr. Okah once, but at the instance of Diezani Alison-Madueke, Nigeria’s Petroleum Minister and president of OPEC.

She said Mrs. Madueke had begged her husband to help establish communication links between Mr. Okah and herself in furtherance of the Niger Delta Amnesty program.

“Even Henry (Okah) regarded my husband as a spy,” she said, quoting a Henry Okah interview with Sahara Reporters. “My husband never spoke to Henry (Okah) until the Petroleum Minister contacted him to link her with Henry Okah.”

She said her husband is a political prisoner, arguing that his troubles began after he accepted to work for President Goodluck Jonathan’s opponent – Ibrahim Babangida – in the 2011 presidential primary elections of the People’s Democratic Party.

She said Raphael Damfebo, a witness who admitted he heard Henry was going to carry out a bomb blast and relayed the information to the convict, had admitted he was threatened with his freedom into making the testimony.

“If my husband is serving life jail term because he heard from the witness, how come the witness who heard from the source is a freeman today?” she asked. “The same witness admitted he told Boyloaf and Timipre Sylva, why are those ones not in jail too?”

Before his arrest on October 3, 2010, Mr. Ebiware led the Niger Delta Renaissance Network and published articles supporting the power zoning arrangement in PDP which could have stopped President Jonathan from succeeding late Umaru Yar’Adua.

Breaking: “Attahiru Jega To Be Sent On Terminal Leave Next Week”