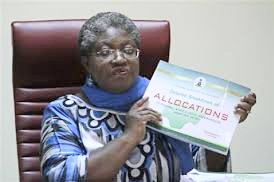 The Minister of State for Finance, Mr Bashir Yuguda, said that the Federal, states and local government areas shared N500.1 billion revenue for the month of January, 2015.
Yuguda made this known when he briefed newsmen on the outcome of the Federation Accounts Allocation Committee (FAAC) meeting in Abuja on Tuesday.

He said that the amount comprised of the month’s statutory revenue of N416 billion, and N6.3 billion refunded by Nigerian National Petroleum Corporation (NNPC).

“Also, there is the exchange gain of N8.6 billion which is proposed for distribution.

“NNPC has paid the sum of N776 million it owed the Federation Account and remitted an additional amount of N4.4 billion, totaling N5.195 billion.

“Therefore, the total revenue distributable for the month of January, including VAT of N63. 9 billion is N500.1 billion.

The local governments, he said, received N75.9 billion, amounting to 20.60 per cent of the amount distributed.

He also disclosed that N39.4 billion, representing 13 per cent derivation revenue was shared among the oil producing states.

On VAT, he said that the gross revenue collected for the month decreased by N9.5 billion from the N73.4 billion recorded in December.

Yuguda said N305.3 billion was generated as mineral revenue in January as against the N381.5 billion generated in the preceding month.

According to him, this shows a decrease of 76.1 billion between the two months.

He also said that the non-mineral revenue for the month of January was N110.6 billion as against the N107.7 billion generated in December representing a decrease of N2.9 billion.

Yuguda lamented over the low revenue generation for the month, while explaining certain reasons for it.

“Also, a 33 per cent decrease in export volume between November and December, 2014, translated to a loss of 159.8 million U.S dollars.

“The shutdown and shut in of trucks and pipelines at various terminals continues to impact negatively on the revenue performance,” he said.

Yuguda also said that another factor was that the non-oil revenues performed below the 2014 budgetary provisions.

He also added that the N35.5 billion which had become a monthly amount being distributed under the SURE-P Programme was no more because of the fall in oil prices.

He said that the new balance in the nation’s Excess Crude Account, was 2.6 billion U.S dollars, and N19 billion in the Domestic Crude Account.

In his comment, the Chairman, Finance Commissioners Forum, Mr Timothy Odah, expressed concern over the continued dwindling of the federation’s revenue.

He called on states to work on increasing their internally generated revenue as the federation allocation has become unreliable to ensure that they meet their needs.