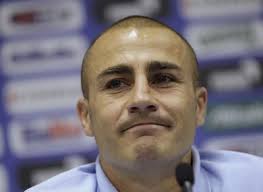 Fabio Cannavaro has been sentenced to 10 months in prison for breaching orders to keep out of his property after it was seized by authorities.

Guardian UK reports that the 41-year-old, who played for Parma, Internazionale, Juventus and Real Madrid, and captained Italy to their 2006 World Cup triumph, has been under investigation for tax evasion. In October, authorities in Naples seized almost €1m of goods linked to Cannavaro and his wife, as well as a €180,000 yacht.

However, his failure to adhere to their ruling after he was caught going for a swim the property’s swimming pool with his wife has led to Cannavaro – now the coach of the Chinese side Guangzhou Evergrande – being handed a 10-month sentence. His wife, Daniela Arenoso, and his brother Paolo, who plays in Serie A for Sassuolo, were also given custodial sentences. All three have appealed and will therefore have their sentences suspended until a final judgment is made.

It has been reported that Cannavaro’s company Fd Service owes over €1m in unpaid taxes. The Italian Agency of Revenue apparently claims that FD Service underpaid on Corporation Tax, Regional Tax and VAT between 2005 and 2010.