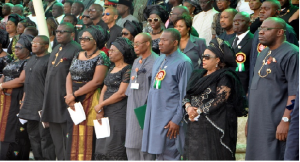 The remains of the female politicians, who died in a ghastly auto accident have been laid to rest at the Bayelsa State cemetery, Azikoro in Yenagoa, the State capital.

Also in attendance, President Jonathan noted that he had a personal relationship with almost all the women involved in the accident.

Dame Patience Jonathan, clad in a black attire, described the late women as her sisters and friends, who shared her dreams and vision to make life more meaningful for the citizenry.

In his tribute, governor Seriake Dickson expressed gratitude to President Jonathan and his wife Dame Patience for personally attending the State funeral service, particularly the show of concern exhibited by the first lady, whom he said had earlier paid condolence visits to each of the families affected by the tragedy.

Governor Dickson remarked that the gruesome death of the women would remain a tragedy to their immediate families and in the history of the State.

In his tribute to his late wife, Mrs Elizabeth Oguru, secretary to the State government, Prof. Edmund Alison-Oguru described her as a wonderful and humble woman, who lived a rewarding life.

In a brief exhortation, Apostle Zilly Aggrey, General Overseer of the Royal House of Grace Church, made references to the scriptures, stating that, no one ‘could question the will of God’. He further prayed to God to comfort the families left behind by the deceased.

Representatives of each of the bereaved families also paid tributes to the deceased and gave a brief background of their lives and contributions to their families and the State and wished them perfect and peaceful rest in the bosom of the Lord.