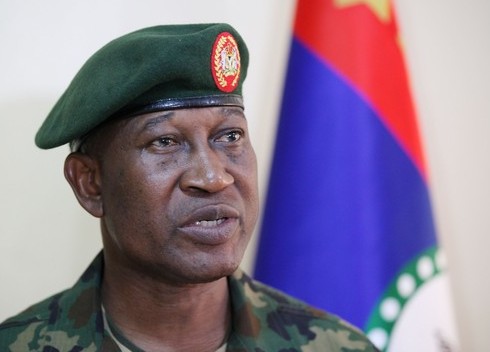 The Nigerian Military and a cross section of Nigerians Tuesday reacted to the statements credited to the Bring Back Our Girls campaigners demanding video footage that will authenticate claims by the Military in battling insurgents in the Northeast.

spokesperson Gen. Chris Olukolade said “It seems that it is only the so-called #BringBackOurGirls group that has not seen all the pictures that accompany the recent DHQ press statements on the war against terror. We think the group should try and check properly.

“The vast majority of well meaning Nigerians appreciates the efforts and sacrifice of their Military. We are humbled by their continuous show of support, solidarity and encouragement as we battle not only to free our girls but to stamp out terrorism in our dear country.” Olukolade concluded.

A sample of a cross section of Nigerians have also reacted in support of the government, condemning the demands by the #BringBackOurGirls BBOG coalition led by Hadiza Bala Usman of the All Progressives Congress, APC & Mrs Oby Ezekwesili, Nigeria’s Former Minister.

Speaking on the demand, Bar. Uche Uke said it was sad that the group could make such request at a time when the Military was gaining grounds, she said: “This is incredulous. I think free speech is being taken too far by these people with their demands. It is a shame they have not rallied against Boko Haram rather against the government. They are traitors in short.”

For Mr. Atanda Adeyemi said : These people should be called to order.”  When contacted, the Military reacted in a telephone conversation,  nothing that the Nigerian Army is encouraged by the show of support from well meaning Nigerians, and puzzled by the BBOG group’s deliberately turning a blind eye to the many evidences presented by the Military.

Speaking in the same vein, Meje Apanmiran said; “President Jonathan remains my president at this time, the opposition should go and find another campaign issue as their Boko Haram campaign issue an attacks on the government and the Military no longer holds water. Nigerians are not fools” he said.

The BBOG group advocating for the rescue of abducted Chibok School girls had demanded verifiable evidence of victories over Boko Haram insurgents from the Military authorities despite the Press statement and pictures of the operation which were released by the Nigerian Defence Headquarters after the operation in Baga.

Meanwhile, a new video released by Nigerian military has disclosed the impact of the current aerial bombardment against the Boko Haram terrorist enclaves, with Nigerian Air Force (NAF) smoking them out from their hideouts.

The video, which was obtained by PRNigeria noted that the military, in well-coordinated operations involving the Airforce and ground troops, have maintained the momentum over Boko Haram terrorists which they attained in the last few weeks.

In the video, terrorists can be seen in complete disarray from their hideouts, under hay of aerial bombardments by Nigerian military aircraft.

Accordingly, the massive air operations have destroyed some of the terrorists’ hideouts around Baga, Gwoza, Sambisa, Bama and Pulka.

The military have also promised that more pictures and videos of the military operations will soon be provided.