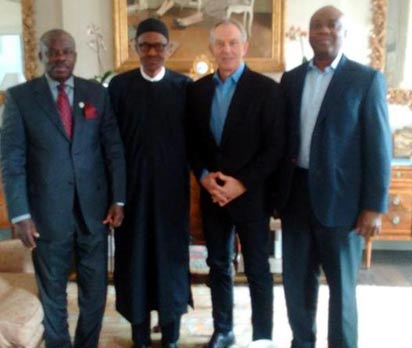 Former Prime Minister and UK envoy to the Middle East, Tony Blair, has confirmed he held a private meeting with the All Progressives Congress, APC, candidate, Gen Muhammadu Buhari(retd) in London, weekend.Governor Ayodele Fayose of Ekiti State had claimed Gen Buhari was not in any meeting with Tony Blair, but that the former head of state had checked into a London hospital. He claimed the APC photoshoped a photo showing Tony Blair, Buhari, Governor Amosu of Ogun State and former Kwara State Governor, Bukola Saraki.Vanguard contacted Tony Blair’s office and got confirmation that the former Prime Minister did had a meeting with the APC candidate.In an e-mail response to an inquiry, Rianne Buter in Tony Blair office, said: “ Mr. Blair had a private meeting with General Muhammadu Buhari in London,” adding that “Mr. Blair hopes to visit Nigeria shortly when he will see the President.”