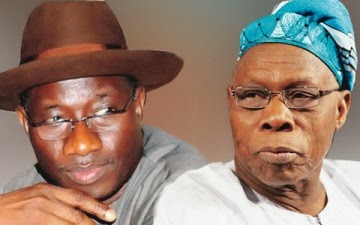 President Goodluck Jonathan has accused former President Olusegun Obasanjo of ridiculing Nigeria before the international community and of scaring investors away from the country by his consistent criticism of his administration.Mr. Jonathan said Mr. Obasanjo, by his utterances, was creating the impression that Nigeria is a country on the verge of collapse.Mr. Jonathan therefore advised the former president to be civil in his criticism so as not to create the impression that the country is in crisis.

“For one reason or the other, Obasanjo may disagree with me as his first political son. You can even disagree with your own biological children, as a human being, not to talk of disagreeing with your political children. So, he can agree or disagree with me, but the utterances have to be managed in a way that it does not affect the economy and security of this country.“But I will use this opportunity, because you asked, to just plead with my father that he is a leader, a former president of the country. He has led the country more than anybody — eight years of democratic governance and almost four years of military governance. No other person has that kind of record.“The stability of this country is critical in terms of the economy of this country. Rating agencies downgrade countries that are going into elections because the feeling is that there would be crisis. When you paint the colour of instability for your own nation, you are doing so much injustice to the country because it affects the economy of the country, not just affecting the country in terms of security and social issues alone. It affects the economy directly. So, I plead with very senior citizens that Nigeria is dear to us; we don’t have any other country than Nigeria.“So, actions and inactions, or utterances, should be guarded so that we don’t expose our country to the international community as if it is a country in danger, a country that is about to collapse. You are frightening investors, especially those who invest hot cash, to pull out their money from the country and that would affect the stock market and it would affect the economy.”Mr. Jonathan however insisted that he remained a political child of Mr. Obasanjo, saying he owes his rise to political prominence to the influence of the former President.“First and foremost, Obasanjo is a father to me. By divine providence and the grace of God, I am the President of Nigeria today. It is not by my strength. But God uses human beings to actualise His own blessings on human beings. And he used so many Nigerians, including former President Obasanjo, to play one role or the other for me,” he said.“I became the deputy governor of a state, became the governor, the vice president and president. I have no issues with him, and I really don’t want to join issues with President Obasanjo. I think it is not necessary,” he added.The relationship between both men worsened after Mr. Obasanjo’s wrote an 18-page open letter to Mr Jonathan on December 2, 2013, blaming the president for failing to deliver on his promises to Nigerians. He also accused him of making no effort to check the growing corruption in the country and allowing insecurity to degenerate.In the letter, Mr. Obasanjo also accused Mr Jonathan of hounding prominent members of the Peoples Democratic Party opposed to his second term ambition.Since then, Mr. Obasanjo has relentlessly criticised the Jonathan administration and all efforts by party chieftains to reconcile both of them have failed.Matters got to a head last Monday after Mr Obasanjo, who apparently got wind of a plan to expel him from the party, dumped the party before the plan was executed. On the occasion, Mr Obasanjo, not one to leave without creating a spectacle, asked the PDP ward leader to tear his membership card.He also announced his retirement from active politics and expressed his desire to be a statesman.