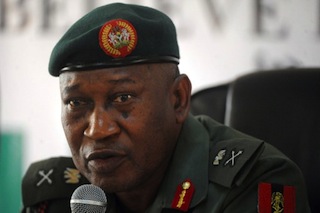 As the Nigerian military and government forces of neighbouring countries continue to gain momentum in an attempt to flush out Boko Haram insurgents, the Ijaw Youth Council Worldwide has cautioned against any ceasefire.

The Udengs Eradiri led IYC contended that any idea of negotiation or peace move from the Boko Haram insurgents or their sympathisers must be resisted.

The group’s position is contained in a statement issued on Sunday by its spokesperson, Mr. Eric Omare. The group said, “The IYC calls on the Federal Government of Nigeria and the governments of neighbouring Chad, Cameroun and Benin Republic not to relent in the ongoing war without flushing out all the Boko Haram insurgents.

“There must be no room for any sort of negotiation. Any idea of negotiation or peace move from the Boko Haram insurgents or their sympathisers must be resisted as it is only a bait to buy time to regroup to carry out more deadly attacks on innocent Nigerians.”

It commended the efforts of the Nigerian Armed Forces and the joint national forces for the successes recorded so far in the ongoing war against insurgency in the northeast of Nigeria.

The IYC, however, sympathised with the families of those who had paid the ultimate price in the crucial national assignment.

The group also called on the traditional, political and religious leaders of the North including youths to support the government and provide the lead in the fight against Boko Haram.

The IYC added, “We urge them to borrow a leaf from the Niger Delta experience where the leaders of the region agreed and provided the leadership that brought the armed resistance in the region to an end.

“The war against Boko Haram insurgency cannot be completely won without the total support of the people and communities directly affected.”

CAN Debunks Allegations Of Threats To Members Who Support Buhari