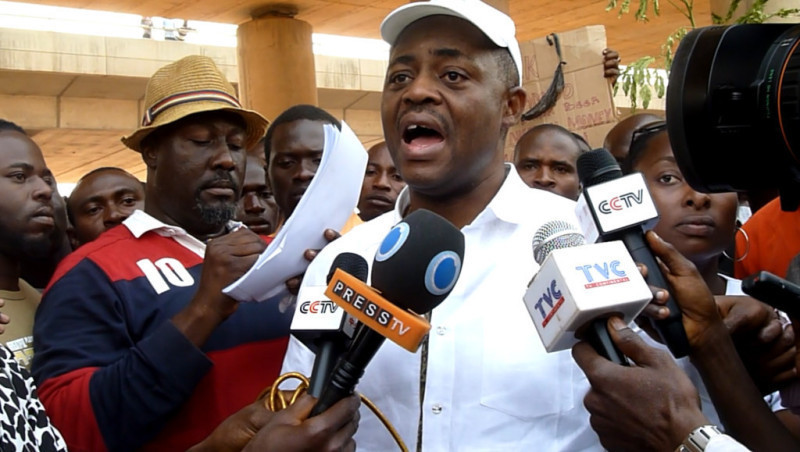 Contrary to President Goodluck Jonathan’s dismissal of the Ekiti rigging audio recording as a fabrication that is not worth his attention, the spokesperson for his campaign, Femi Fani-Kayode has admitted that the tape is genuine but that the characters involved in the meeting captured in the recording were not discussing how to rig the 2014 governorship election in Ekiti state.

Speaking at a press conference in Abuja, Mr. Fani-Kayode said his team had listened to and reviewed the recording and that it came to the conclusion that the opposition All Progressives Congress turned fact on its head by claiming that Governor Ayodele Fayose of Ekiti state; former Minister of State for Defence, Musiliu Obanikoro; and the Minister of Police Affairs, Jelili Adesiyan, who featured in the recording, planned how to rig the election.

“We have listened to the audio clip and we make bold to say that the discussion that took place in it did not make any mention of any form of rigging in the Ekiti state governorship election and neither did it contain any evidence of any conspiracy to rig,” he said.

Mr. Fani-Kayode also said rather than attempting to orchestrate rigging, what the audio clip clearly revealed was Governor Fayose expressing concerns that a military commander was not acting on information about illegal movement of weapons into certain parts of the state.

“The Governor and others were apparently worried that safety of the voters and INEC officials could be compromised if security measures were not strictly enforced,” he said.

Mr Fani-Kayode’s admission of the authenticity of the tape is another chapter in the series of contradictory responses from the ruling party and those at the centre of the vote rigging plot.

In an interview with the Wall Street Journal, last Friday, Mr. Jonathan said he would not investigate the authenticity of the audio recording because it was a “fabrication.”

“It’s all fabrications. Why should I investigate things that are not real?” he asked.

Using forensic analysis that compared the voices in the recording with public record samples of the individuals in the recording, Guardian Consulting, The New York-based security firm, that helped authenticate the recordings, confirmed that the tape was genuine.

“The voices from the recording were subjected to a Forensic Voice Frequency Comparison against known samples and were found to match to a 98 per cent degree of certainty,” the firm said.

Mr Jonathan’s dismissal of the tape as a fabrication came after Mr Obanikoro denied taking part in the meeting and threatened to sue Premium Times and Sahara Reporters for their vigorous reporting on the matter.

Mr. Adesiyan confessed that the recording was genuine but that it was more of an altercation between Mr. Fayose and Mr. Momoh after the former accused the latter of favouring the then governor of the state, Kayode Fayemi.

“Fayose accused the General who supervised the Ekiti election of taking bribe from Fayemi and APC, that was two days before the election. They called me because they said the General disarmed policemen and I told him to allow the policemen to do their job,” he told the Sunday Punch newspaper.

After initially claiming his voice was manipulated using speech software such as Natural Voices, Mr. Fayose later admitted during a political event in Ekiti that it was his voice that was captured in the tape but claimed he was rebuking Mr. Momoh for favouring the APC.

“If you listen to the tape about military rigging in Ekiti. Listen to the tape you will see that I was the one accusing the army of compromise. Listen, take time to listen. But they would come back with propaganda and saying it all as if the whole world of propaganda belongs to them,” he said

While challenging the APC to do a critical content analysis of the discussions in the audio clip, Mr. Fani-Kayode said it was the APC that rigged the governorship election in Osun state.

“During the course of those elections, some of their agents gathered in secret locations where they thumb-printed ballot papers in favor of their governorship candidate, Ogbeni Rauf Aregbesola,” he said.

“It is ironic that instead of purging itself of its own insatiable appetite for rigging and cheating, the APC, through its Presidential candidate, General Muhammadu Buhari, chose to call a press conference in which he alleged that our leaders were ordering soldiers to rig in Ekiti state.

“This is a clear case of the pot calling the kettle black,” he said.

“Dont Compromise On The Unity Of Nigeria” – Kukah Tasks Politicians