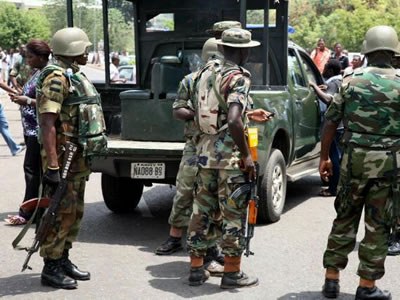 Security Operatives comprising the Army, Police, Prison Officers and the Nigerian Security and Civil
Defence Corps on Friday foiled an attempt by unknown gunmen to break into the Afokang Prisons, Calabar, the Police has confirmed.

Earlier, NewsWireNgr had reported that unknown gunmen attacked the Federal Prison, Afokang in Calabar, with the intention of freeing an unknown number of inmates.

Confirming the incident, Mr Horgan Bassey, the Police Public Relations Officer (PPRO) for Cross River Command, said an unspecified number of gunmen attempted to force their way into the prison but were repelled.

“There was an attempt to break into the Afokang Prison this morning by some hoodlums but it was repelled by a joint security force on ground and the situation has returned to normal.

“There was no casualty, and investigation has commenced to ascertain the mission of the invaders,‘’ he said.

A resident of Afokang, Mr Emmanuel Ijen, told the News Agency of Nigeria (NAN) that they started hearing sporadic gunshots at about 11 a.m. on Friday morning around the prisons.

“We just started hearing gunshots around the prisons and everyone began to run for safety, ‘’ Ijen said.

Another resident, Mr Uwem Ekong, disclosed that the gunmen came through the creeks of Calabar River.

“I saw some of them scampering through the waterside; so I suspect that they came through the creeks,‘’ he said.

So far, all attempts to speak to prison officials proved abortive as the whole street was cordoned off by stern looking security men.