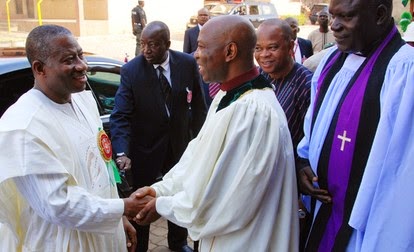 A Borno based pastor,Kallamu Musa-Dikwa, who is executive director of the Voice of Northern Christian Movement, has accused the Christian Association of Nigeria (CAN), of receiving a sum of N7 billion from the presidency to facilitate the re-election of President Goodluck Jonathan.

Rotimi Amaechi, governor of Rivers state earlier claimed that pastors across the country were given N6bn to vote against Muhammadu Buhari, presidential candidate of the All Progressives Congress (APC), but Musa-Dikwa has now said there was even an extra billion naira, and the money was received by the Christian Association of Nigeria (CAN).

“It was N7bn that was given to the CAN leadership by President Goodluck Jonathan. They(CAN) later disbursed N3m to the state chairmen of the CAN,” he told journalists in Kaduna on Thursday.

“The money was handed over to the CAN Leadership on 26th January, 2015. Actually, President Jonathan is using CAN President, and it was the CAN President who collected the monies and shared N3m to the CAN executives in each state.” He said some pentecostal bishops also collected their share and accused CAN of “terrible corruption”.

“One of the CAN officials from Abuja told me that they had collected the money. The corruption in CAN is terrible. They are corrupting the body of Christ because of money,” he said.

“They are now threatening Christians in Borno state that they will deal with anybody who refuses to vote for Jonathan. And the CAN officials are now campaigning that if Buhari emerges president, he will Islamise Nigeria.

“They are saying that Osinbajo collected monies from Islamic world; and that the same Osinbajo will resign soon after Buhari wins to give way for Tinubu to emerge Vice President.”