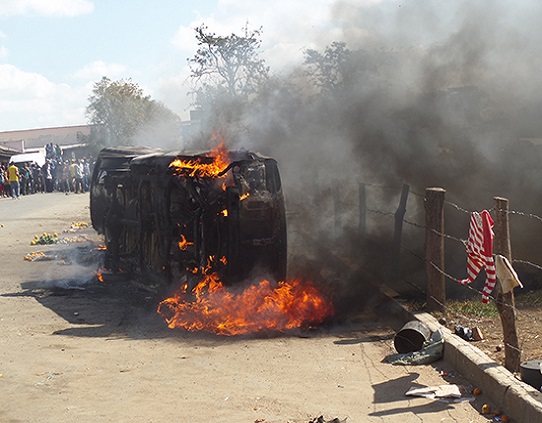 About nine women from Bayelsa were reportedly burnt to ashes, on Friday, the 13th of February, in a ghastly motor accident, after visiting the Nigeria’s first lady Dame Patience Jonathan.

According to The Nation newspaper report, the accident which occurred at Ahoada, in Rivers State was said to have involved a Toyota Sienna car, jeep and a bus with an inscription, Peoples Democratic Party Women Initiative.

Security source report puts the the number of burnt victims at 20 adding that all the occupants of the bus perished.
The source who preferred anonymity said:

“The affected women were travelling in the bus which went up in flames. They were burnt to ashes. Only one of the women was rescued.”

It was learnt that the women paid a solidarity visit to the first lady in Okirika where they spent two days.

He, however, said only nine persons burnt to death, two died without been burnt while many others were rushed to Madonna clinic in the area.

He explained that the accident occurred when the tyre of the Toyota Sienna burst and rammed into the bus carrying the women.

Mr Vincent concluded that the jeep also rammed into the bus in confusion, a situation that made the bus to go up in flames.