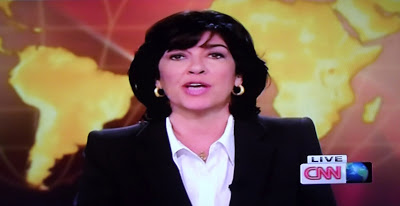 I first came across Christiane Amanpour on CNN in the late 90s when she covered the wars in Sarajevo. I was moved by the risk she put her life through by staying on the frontline alongside soldiers, clutching her microphone with one hand and the helmet on her head with the other. You cannot however stay on one side of the battle for long without feeling the camaraderie of people who go through near death experiences and so Amanpour quite simply began to take sides. For Amanpour in my eyes, Sarajevo was her peak and it marked her denouement as well. Many would start to question her objectivity and impartiality and she was forced to famously declare “There are some situations one simply cannot be neutral about, because when you are neutral you are an accomplice. Objectivity doesn’t mean treating all sides equally.” This marked the beginning of new kind of biased journalism that some call “advocacy or activist journalism”.

To make matters clearer for us and worse for her reputation as a leading light of the fourth estate of the realm, Amanpour got married to James Rubin, a top Democrat player till today. Now, another top Democrat strategist David Axelrod through his political strategy company AKPD works for APC in Nigeria which is not bad in itself. But seeing that closeness to America’s President while working for Nigeria’s opposition party may lead to a conflict of interest especially as PDP and APC traded accusation on who was behind Boko Haram, AKPD announced in March 2014 (after the Chibok girls kidnap which brought the Boko Haram issue to increased world attention) that it had severed ties with APC. Curiously, this website alleges that AKPD still works for APC.

I did a series of tweets yesterday and I started with a typical Nigerian supposition that America epitomizes all that is good with the world which leads to thoughts that America cannot be complicit in the affairs of another country. Some still insist though that America’s CIA was complicit in the death of Congolese leader Patrice Lumumba while in Nigeria here we must not forget that Chief MKO Abiola died some days after General Sani Abacha did on a day he (Abiola) had played host to Thomas Pickering and Susan Rice whom some accounts say served him the last cup of tea he drank before he died about an hour later.

Now, Amanpour when she has no interests in a particular matter can be quite ruthless in her line of questioning: moving swiftly from one line of interrogatory question to the other. Being the first time ever that she would interview Muhammadu Buhari, some burning questions such as his controversial statements on Sharia and Islamic fundamentalism, his initial condemnation of force against Boko Haram, his vow not to contest election after 2011 or even more recently, the cases of perjury and disqualification hanging over his head. Last night though, she conveniently threw leading questions at Muhammadu Buhari that introduced the two major APC talking points, firstly, that corruption is on the increase in Nigeria and secondly that Boko Haram is winning the insurgency war against Nigeria. Unfortunately, for their scripted exchange, Transparency International ratings proclaim that corruption is on the decline in Nigeria while Buhari himself few days ago downplayed the threat of Boko Haram as having been restricted to 14 Local Government across three northern states.

The only time Amanpour asked Buhari any question that seemed a bit difficult, she delicately chose her words to say that some have said that the next elections in Nigeria was a choice between ‘a failed President’ (President Goodluck Jonathan) and a ‘former’ dictator. To be fair, she did reel out an abridged version of his actions as a military dictator but then gave him a clear opening by asking: “Have you changed or is this what the Nigerian people have to look forward to?”

Even Mugabe would smile at this.

With my firm belief that President Goodluck Jonathan will win a second term in office, I can hazard a guess as to the endgame of all this – CNN and advocacy journalists like Christiane Amanpour will rely on a certain narrative: that the elections were rigged in favour of Goodluck Jonathan which is why I am glad that Mr. President made it clear yesterday that he had no intention of removing INEC boss Attahiru Jega and that if he loses the next elections, he would handover on May 29, 2015 and go back to his private home. Knowing full well that APC usually likes to use the Monkey’s Paw tactics of making others shoulder the blame for an action that it engineered, I am certain that this Interim Government idea being mooted in some sections of our press is nothing but an APC power-sharing arrangement.

Switching stations swiftly from NTA to CNN was a stark contrast and not only because the NTA visage compared to CNN’s was more like an analogue rendition but also because Buhari seemed like a relic of a lost age compared to Jonathan. Where Jonathan was engaging, eager to be questioned and a little bit relaxed but dignified, Buhari seemed timid, tired, troubled and uptight. And why does he keep looking quickly to the left when he gets lost?

Egbon Dele Alake is that you there sir??

Body language analysts say that making hand gestures while talking is a sign that the speaker is more likely to be saying the truth while the opposite is also valid. Jonathan gestured with his hands but beyond Buhari’s elbow, we never saw his hands. Apart from the excusable APC flag that was behind Buhari (which was that flag behind Jonathan other than the Nigerian flag though?), flashes of crowds from Buhari rallies and other APC display were shown on the TV behind Amanpour herself. Ordinarily, those flashes behind her would be bland. Just in case you missed it though: watch the Buhari Interview with Amanpour here and watch her interview with Dr Ngozi Okonjo-Iweala