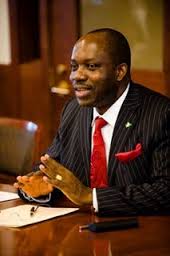 Chukwuma Soludo, former Governor Central Bank of Nigeria, article titled “Ngozi Okonjo-Iweala and the missing trillions,” has rightly generated a lot of buzz in both social media and the traditional media. This is rightly so because of the credibility of the person that wrote the article. Soludo is widely considered intelligent and his profile will intimidate ordinary mortals any day. He is an economist who has proven his mettle with several well researched papers and who is widely consulted on economic issues.

So, when Soludo writes, especially, on economic issues, Nigerians and the world pay attention. This is why his recent article, that was a reply to a response from Ngozi Okonjo-Iweala on another article he published, attracted so much attention. But how much of the issues that Soludo raised in his article can stand up to facts. I will take the key claims in the rather long article, especially where it concerns figures.

One of the claims that Soludo made was that under Ngozi Okonjo-Iweala watch “an estimated over N30 trillion is missing or stolen or unaccounted for, or simply mismanaged.” Is this true? N30 trillion based on the average official rate of N175 to the dollar is about $171 billion. NOI was appointed Minister of finance in July 2011. So what Soludo is saying is that from July 2011 to date, $171 billion has gone missing or mismanaged under her watch.

This basically means that there was no way N30 trillion would have gone missing in the last four years. That would have meant every penny the federal government earned in the last four years and also more than 50% of the revenues that should go to the states has been stolen or unaccounted for or simply mismanaged. Practically, the Nigerian economy would have collapsed as civil servants would have gone unpaid and businesses gone burst since government spending drives business in the country.

Soludo did not however give us what proportion of the N30 trillion was stolen mismanaged or has gone missing. This Soludo claim cannot be backed up with facts and is therefore not credible.

Soludo’s second allegation concerned the exchange rate. He wrote “As I write, the naira exchange rate to the dollar is N215 (from N158 a few months ago) and unless oil price recovers, this is just the beginning.”

Soludo’s seems to be confused about issues here. The N215 exchange rate that Soludo is referring to is apparently the parallel or black market rate of the Naira which as at the date Soludo wrote was actually about N210 to the dollar and definitely not N215. Then instead of comparing the rate with black market rate “months ago’ Soludo compares to rate with the official rate “months ago’ of N155 to N158 which was devalued to N168. It is like saying apples and mangoes are the same because both are fruits. The official rate of the Naira has hovered between N155 to N168 and never N215. The black rate has hovered between N180 to N210.

Still on the exchange rate, Soludo says “Naira exchange rate appreciated under me from N133 to N117 before the global crisis; and reserves grew to all time high of $62 billion. For the first time since 1986, the official, interbank and parallel market exchange rates converged under me. You can’t match these records!”

Soludo is right but it is also true that the Naira depreciated heavily under Soludo despite Nigeria’s huge reserves. From the N117 official rate as at December 2007, it had depreciated by 26% to N148.22 in June 2009, the month Soludo left as CBN governor. Compare it with the current depreciation of about 6% from N158 to N168.

In the black market, the naira was already exchanging as low as N155 to N170 to the dollar under Soludo from about N134 before the global economic crisis.

It must also be noted that the external reserves, which was at an all time high of $62 billion in September 2008 had dropped to a low $43 billion as at June 2009 by the time Soludo was leaving office. About $19 billion had been spent by Soludo within 10 months trying unsuccessfully to defend the Naira.

The external reserve currently stands at $34 billion, which is just $9 billion less than the $43 billion Soludo left in June 2009. So it is not factually right for Soludo to claim that the current government ran down the external reserves in the last five years.

Soludo statement is largely true except that that by the time Soludo was leaving as CBN governor in June 2009; the average NPL ratio was in excess of 40%, with eight banks having NPLs in excess of 60%, which necessitated the setting up of AMCON to buy the toxic assets from Nigerian banks.

All Nigerian owned banks sold toxic assets to AMCON which acquired toxic assets with a face value of N5.7 trillion. So, yes Soludo reduced toxic assets in the system but lax regulations of banks under him, soon resulted in the fast growth of NPLs resulting in the eventual collapse of eight banks.

Soludo also defended his record of lax regulation by saying;
“I put on record that there was never any information/report of infractions by any bank which was brought to my attention and which we did not act upon decisively during my tenure.”

He also wrote that “it is also a fact that the alleged personal criminal infractions (including lapses in corporate governance Madam alluded to) by some bank CEOs were found out, only AFTER they had been removed from office. My successor told me that the comprehensive audit of the banks did not reveal such infractions.”

This is an interesting revelation from Soludo. Because if it is true, it means that Sanusi Lamido Sanusi sacked the Managing Directors of the banks before he sent auditors to the banks to look for evidence to back his allegations that the banks were being mismanaged. I hope Sanusi will clear the air on this allegation.

However, in a lengthy speech delivered by Sanusi Lamido Sanusi at Bayero University Kano (BUK), in 2009, a few months after emerging as CBN governor, and sacking the managing directors of the eight banks, he indicted the Soludo led CBN leadership for failing to take action, when it was obvious that some Nigerian banks were in trouble.

This is what Sanusi said in the lecture delivered at BUK; “As credit levels rose and stock prices inflated, the CBN failed to halt this vicious circle and foresee the consequences. The CBN did not highlight or failed to communicate the problem to fiscal authorities and the market in general. The sad story in all this is that we now have evidence that junior officers in the CBN did document their concerns to CBN top management at that time, but no action was taken. We also have evidence that the NDIC documented its concerns but its efforts to get the CBN leadership to act quickly were rebuffed.”

This is a clear contradiction to what Soludo is now saying in his defense.

It is a bit surprising that a well respected Professor of Economics will write an article with so many factual errors that can easily be cross checked. It sounds more like political mischief than a desire to raise genuine debate on economic issues.