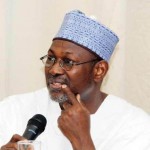 The Chairman of the Independent National Electoral Commission (INEC), Prof. Attahiru Jega would meet with the President and members of the Council of States, later today. The spokesperson of the Commission, Kayode Idowu, confirmed Prof. Jega’s scheduled appearance, in the Council.of State, meeting.

Prominent among discussions expected to be addressed in the meeting, is the verdict on the rumoured postponement of the forthcoming polls. It was reported here that the President’s meeting with Council members, would among other things, discuss the possibility or otherwise, of a poll shift.

Related Topics:2015 electionsPolls Shift
Up Next