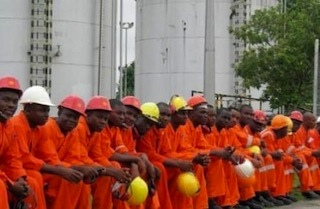 In line with the dwindling prices in the oil market, this article about the Nigerian oil blocs business shrewd in mystery is again brought to the fore; Abdul Kuku gives us an insight by exposing some of the bosses in the oil business in Nigeria.

“The oil bloc business is so lucrative that Danjuma’s Sapetro divested of its investment in Akpo condensate for $1billion dollars. The business is second to none in Nigeria. That is why any attempt to investigate the activities in this sector will always be futile. The money is so much that they give bribes in millions of dollars. A birthday gift or child naming gift from an oil bloc owner to a government official could be as paltry as $2million dollars, and if the official’s father died, the condolence gift could reach mere $3 million dollars.

When they want to bribe legislators, it is in millions of dollars and any ongoing investigation ends within weeks. They are so confident that with excess money they can buy up Nigeria and they are succeeding OML 110 with high yield OBE oil fields was given Cavendish Petroleum owned by Alhaji Mai Daribe, the Borno Patriarch in 1996 by Sanni Abacha. OBE oil field has estimated over 500 million barrels of oil. In layman’s language and using average benchmark of $100 dollars per barrel, translates to $50 billion dollars worth of oil reserve. When you remove the taxes, royalties and sundry duties worth about 60% of the reserve payable over time you get about $20billion dollars worth of oil in the hands of a family.OPL 246 was awarded to SAPETRO, a company owned by General Theophilus Danjuma, by Sanni Abacha in 1998. Akpo condensate exports about 300,000 barrels of crude daily.

ASUOKPU/ UMUTU marginal oil fields is operated by Seplat Petroleum. Seplat is owned by Prince Nasiru Ado Bayero, cousin to the Central Bank Governor Lamido Sanusi. This oil field has the capacity of 300,000 barrels of oil daily. This translates to $30million dollars daily at average benchmark of $100 dollars per barrel. Deducting all sundry taxes, royalties etc , this field can yield $12billion dollars daily for the owners .

Intel owned by Atiku, Yarádua and Ado Bayero has substantial stakes in Nigeria’s oil exploration industry both in Nigeria and Principe and Sao Tome.AMNI owns two oil blocks OML 112 and OML 117 which it runs Afren plc and Vitol has substantial stakes in oil blocks. Afren plc is operating EBOK oil fields in OML 67. Vitol lifts 300,000 barrels of Nigerian oil daily. Rilwanu Lukman, former OPEC Chairman has stakes in all these named three companies.OPL 245 was awarded to Malabu Oil& Gas Company by Sanni Abacha. Dan Etete, Abacha’s oil minister owns Malabu Oil. In 2000, Vice President Atiku Abubakar convinced Obasanjo to revoke OPL 245 given to Malabu Oil. Etete had earlier rejected Atiku’s demand for substantial stakes in the high yield OPL 245 and it attracted the venom of Ota Majesty who revoked the licence. However, in 2006, Obasanjo had mercy on Dan Etete and gave him back his oil block worth over $20 billion dollars.OPL 289 and OPL 233 was awarded during Obasanjo era to Peter Odili fronts, Cleanwater Consortium, consisting of Clenwater Refinery and RivGas Petroleum and Gas Company. Odili’s brother in law, Okey Ezenwa manages the consortium as Vice Chairman.

OPL 286 is managed by Focus Energy in partnership with BG Group, a British oil concern. Andy Uba has stakes in Focus Energy and his modus operandi is such that you can never see his name in any listings yet he controls OPL and OML through proxiesOPL 291 was awarded to Starcrest Energy Nigeria Limited, owned by Emeka Offor by Obasanjo . Immediately after the award, Starcrest sold the oil block to Addax Petroleum Development Company Limited (ADDAX) Addax paid Sir Emeka Offor a farming fee of $35million dollars and still paid the signature bonus to the government. Emeka Offor still retains stake in ADDAX operations in Nigeria.Mike Adenuga’s Conoil is the oldest indigenous oil exploration industry in Nigeria. Conoil has six oil blocks and exports above 200,000 barrels of crude daily.The oil block national cake sharing fiesta could take twists according to the mood of the Commander-in –Chief at the particular time. In 2006, Obasanjo revoked OPL 246 which Abacha gave to Danjuma because he refused to support the tenure elongation bid of the Ota Majesty. In 2000, Obasanjo had earlier revoked OPL 241 given to Dan Etete under the advice Atiku.However, when the Obasanjo-Atiku face off started, the Ota Majesty made a u-turn and handed back the oil block to Etete.During the time of Late President Yarádua , a panel headed by Olusegun Ogunjana was set up to investigate the level of transparency in the award of oil blocks. The panel recommended that 25 oil blocks awarded by the Obasanjo be revoked because the manner they were obtained failed to meet the best practices in the industry. Sadiq Mahmood, permanent secretary in the Ministry of Petroleum endorsed the report to then president with all its recommendations . As a result of the report Yarádua revoked eleven oil blocks.In April 2011 Mike Adenuga attempted to buy Shell’s OML 30 for $1.2 billion dollars. The Minister for Petroleum and Nigeria’s most powerful woman refused the sale of the OML30 to Adenuga citing national interest. This block was later sold to Heritage Oil for $800 million dollars eleven months later.In the name of competitive bidding, which Obasanjo introduced in 2005, Officials bring companies overnight and through processes best described as secretive and voodooist they award blocks to party faithful, fronts and phoney companies. They collect gratifications running into hundreds of millions of dollars which is paid into an offshore account and the nation loses billions of dollars of revenue to private pockets.