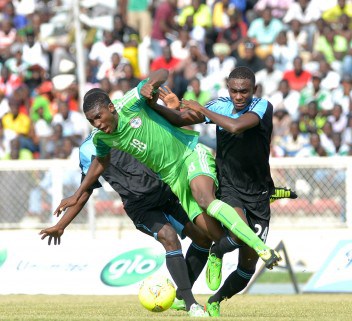 Nigeria’s under-20 male team, the Flying Eagles, on Friday trounced Nigerian Premier League side, Dolphins of Port Harcourt, by four goals to one, thereby winning the Super 4 Invitational Tournament in Abuja, with a match to spare.

News Agency of Nigeria (NAN) records that, the Flying Eagles, who were invited alongside the national under-23 team to the competition for the top four clubs on the domestic scene, recorded an unassailable lead with 12 points, having recorded four wins from four matches they have played so far in the six-team competition.

The under-23 side, also known as Dream Team VI, are in second place on eight points, while Enyimba have seven points, and Kano Pillars are on four points. Also on the log, Warri Wolves have three points, while Dolphins are bottom without any points.

The Flying Eagles got off to a flying start as Taiwo Awoniyi gave the lead after 24 minutes, finishing exquisitely from Obinna Nwobodo’s center. The Flying Eagles extended their lead in the 42nd minute, after Dolphins defender Jonathan Zikiye, put through his own net in a desperate attempt to clear the ball from danger.

The Nigerian under-20 side went one better on 49 minutes, as Bernard Bulbwa, charged from the midfield, ghosted past his marker before coolly slotting home, to make it 3-0, few minutes after the restart.

However, three minutes later, Dolphins got a lifeline as  Christain Pyagbara reduced the deficit when he turned sharply inside the box before firing past Flying Eagles goalkeeper Olorunleke Ojo.

The Port Harcourt, then clipped their own wings, as there indiscipline saw two players sent off in the space of four minutes, for dangerous play thereafter – Ezuruike in the 61st minute and Tijjani Adamu two minutes later.

They were made to pay late on, in the 89th minute, as substitute Chidera Eze grabbed a deserved fourth goal for the Eagles.

The final matchday is on Sunday, when the Flying Eagles take on Dream Team VI at 5 p.m. in a fixture, that is surely a dead rubber for the junior side. In the other games, Warri Wolves will also square up with Dolphins FC at 1 p.m., while Enyimba will take on Kano Pillars at 3 p.m.