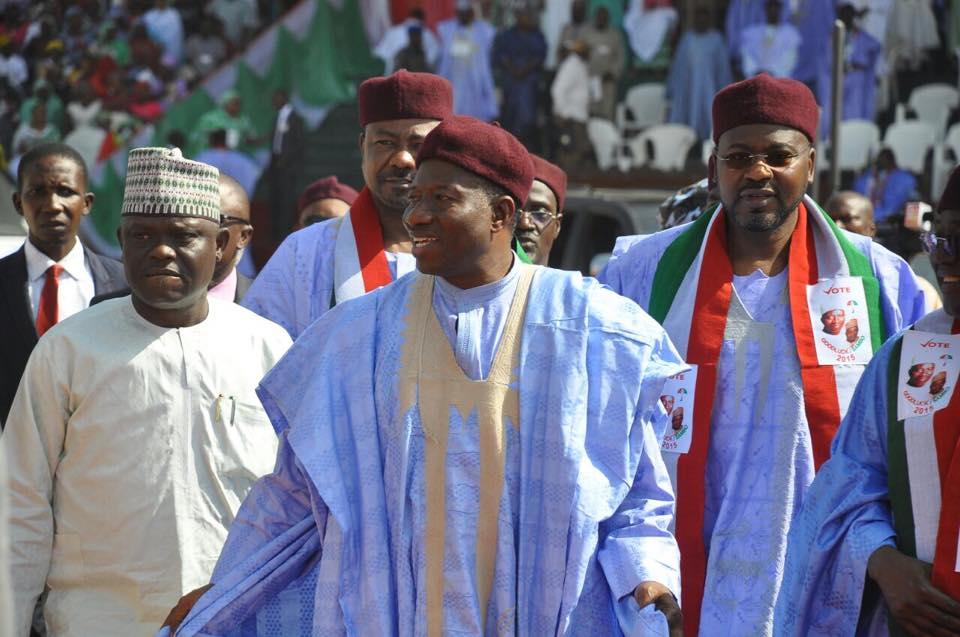 Some security personnel, journalists and the medical team, who accompanied President Goodluck Jonathan on his campaign tour of Maiduguri, Borno State, were still trapped in Maiduguri, yesterday, following attack on the city by the Boko Haram sect.

The team which was billed to have left for the venue of the President’s campaign, was still in the state due to the 24 hour-curfew imposed by the Nigerian Army on Maiduguri, the state capital.

One of those trapped told Vanguard on telephone: “We are hiding and there is serious fighting going on between the insurgents and security personnel. Security men are battling to repel the insurgents.

“The military said that troops have repelled the attack but they will have to comb the bushes to get rid of the insurgents and they said they might not finish today. Meaning that we can not leave today (yesterday).”

According to the source, the entire convoy of the President remains a major target of the insurgents who are bent on attacking the team in order to embarrass the presidency.

A statement by the Defence Headquarters on its tweeter handle yesterday said: “Troops are repelling a simultaneous attack on Monguno and Maiduguri by terrorists. Coordinated air and land operations are being conducted now.”
Meanwhile, the curfew imposed on Maiduguri would be reviewed today.

Meanwhile, at the end of the battle, 53 terror suspects and 12 residents were killed.

The insurgents launched a dawn raid on Maronti and Njimtilo villages in the outskirts of the Borno State capital, prompting soldiers to respond with heavy weaponry and air strikes while the entire city was on lock-down.

During the operations, a Cobra Armoured Personel Carrier, APC, heavy artillery guns as well as some machine guns and other weapons were captured from the fleeing terrorists. Three Golf cars loaded with explosives were also destroyed.

A terse statement signed by spokesman of the 7 Division, Col. Sank Usman, in Maiduguri yesterday read: “The 7 Division, Nigerian Army has officially announced the imposition of a 24-hour curfew in Maiduguri till further notice.”
Reports said that a group of terrorists who attempted to take over the city was confronted by troops as another group of suspected members of the group launched an attack on Monguno Local Government Area of the state.

Monguno is about 100 kilometres north of Maiduguri and had witnessed series of deadly attacks in recent past.

A source told Vanguard that the terrorists who attacked Monguno had the military barracks in town as their main target.
He said: “Many residents of Monguno and some security operatives had to flee for safety.”

Residents around Maimalari, which is the headquarters of the 7 Division in Maiduguri as well as Shagari Low cost area in the metropolis, said they woke up in the morning only to discover that many fleeing residents of Monguno were passing through their communities heading to Maiduguri for safety.

It was, however, not clear if there were casualties from the Monguno attack at press time.

The 24-hour curfew imposed in the course of the operation is expected to be lifted as soon as mop-up operation is concluded. Citizens will be allowed to go about their lawful activities from 6 am today.