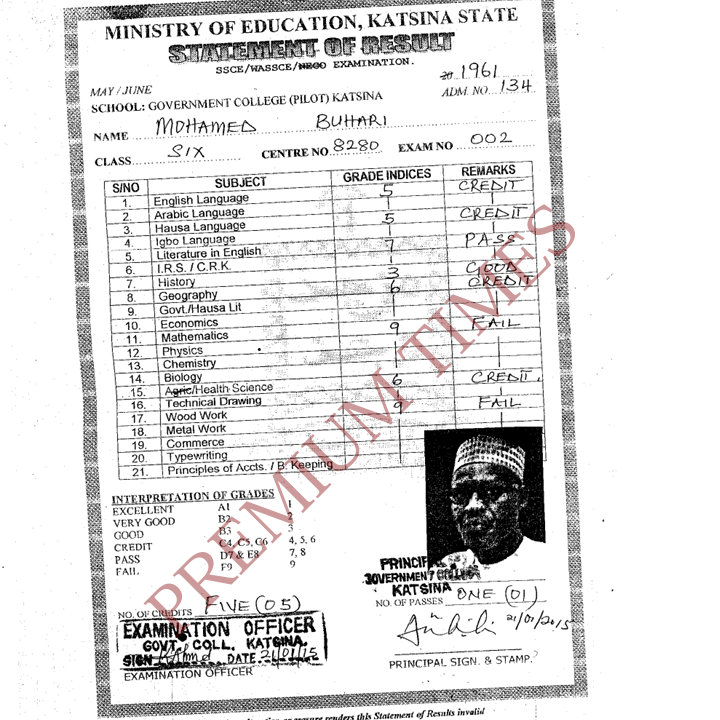 The Principal of the Government College, Katsina, Mallam Isyaku Bello, has, allegedly, been receiving death threats, barely 24 hours after releasing the most sought after WASC result in the country. The source of the threats is yet to be ascertained. The principal was summoned by his employers, the Katsina State Ministry of Education, in connection with the release of the results, sources close to Mallam Bello said last night.

The embattled principal was said to have explained that he needed to defend the integrity of the college (formerly Provincial Secondary School, Katsina) and not Gen. Buhari. Bello made distress calls to his friends and relatives, The Nation reports suggested that,  one source said: “Some forces were unhappy with the issuance of results to Gen. Buhari and they have been threatening the principal. They have been calling him names, abusing him. Some were actually threatening to deal with him. They told the principal that he ought to have left Buhari to his fate instead of releasing his results.”

The source added that, “faced with pressure, the principal has reached out to friends and relatives on the threats. He explained that he did so to protect the integrity of the college and not anybody’s. We hope that no harm will come upon the principal, who was just doing his job.”

It was unclear as at press time last night whether Bello had reportedthe threat to the police or not. He did not pick his calls and messages to his telephone were not replied. A highly-placed source in APC Presidential Campaign Council confirmed the threats. He said: “This is an unfortunate development if it is true that the principal is really being harassed for doing an official assignment.”

But another source said: the Katsina State Government actually consented to the release of the results by the Ministry of Education in view of the sensitive nature of the issue at hand. A government source said: “Since the WASC results of Buhari had become political, the position of the government was that the principal ought to have cleared the air after all Buhari is a citizen of the state.” When contacted, the SA Media to Governor Ibrahim Shema, Mr. Lawal Ahmad Matazu, said: “Is that so? I’m hearing it for the first time from you. I will find out.”

Senate Turns It Back on Convicted Nigerians in Indonesia.