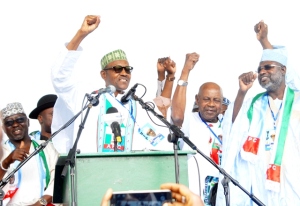 The venue of APC presidential campaign rally in Sokoto state has been changed following a reported bomb scare.

The party had earmarked the Sokoto state stadium for its rally but changed it this morning to the Sokoto Trade Fair complex after a man on a motorcycle was arrested with two bombs on him.

Security sources told  TheCable that at 5am on Thursday, a man on a motorcycle was seen making suspicious movements at the stadium, forcing agents to accost him.

It was rumoured that they discovered what looked like bombs on him but the police have dismissed the report.

El-Mustapha Sani Sal, the police spokesman in Sokoto state, denied knowledge of any such incident.

“I’m hearing it for the first time. It is not true. People should go about their normal business,” he told

The trade fair complex had initially been slated for the rally but no explanations were given for the change in venue, which must have fulled the rumour.