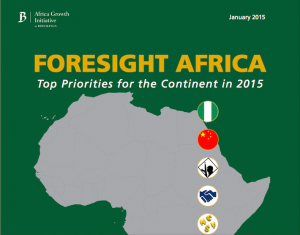 Brookings, the World’s most influential think-tank based in the United States, have projected a President Jonathan victory over the opposition candidate’s General Buhari in the 2015 Elections which it suggests would be keenly contested.

The analysis, context and rationale of the think-tank’s projections is contained in the Brookings publication titled: Foresight Africa – Top Priorities for the continent (January 2015).

“Though the election is expected to be very competitive, the odds still favor President Jonathan.’

According to Brookings, the All Progressives Congress (APC) is a fragile anti-jonathan establishment with a sole purpose to return power to the north.

“The party is, however, a fragile one that seems united only in its quest to wrest the presidency from Jonathan or to have power “returned” to the north”

“The APC gets much of its strength from tap- ping into anti-Jonathan sentiments in the Muslim north and grievances among the Yoruba who feel that the Jonathan administration has ignored them in key political appointments.”

The Report also indicated that the APC’s strategy is hinged on a combination of popular votes from the North West, North East and “the battleground SouthWest” but also hinted at the possibility of Bola Ahmed Tinubu not delivering the region contrary to speculations.

“What remains to be seen, however, is whether Bola Tinubu—a former governor of Lagos State who played a pivotal role in the formation of the APC and is considered to be the party’s strongest mobi- lizer in the southwest—will be very enthusias- tic in delivering the battleground southwest to the APC during the elections.”

“Tinubu indicated his interest in being the party’s vice presidential candidate but being a Muslim like Buhari, the party’s strategists felt that a Muslim-Muslim ticket might offend Christians and cement the PDP’s labeling of the APC as an Islamic party.”

On President Jonathan’s performance: “despite Boko Haram—the country is thriving: The economy continues to grow and—with the re- basing of its GDP—became the largest econo- my in Africa and the 26th largest in the world. Jonathan’s supporters also point to his success in containing the Ebola virus, which earned him commendations from countries and institutions around the world.”

The Brookings Report also identified factors such as incumbency and numerical control of States where PDP has 21 States and APC only 14 as giving PDP an edge.

“The greatest strength of the ruling PDP is its “power of incumbency,” and all the institutional support that goes with it. Not only does it have federal resources to use as patronage, it also controls key institutions”

The report advised that all efforts should be deployed to ensure a free, fair and transparent elections and to avoid a meltdown as post-election violence seems very likely.

“Post-election violence is therefore likely in the north if the APC loses while renewed militancy in the restive Niger Delta is likely if Jonathan does.” the report noted.

Kaduna Shut Down For Muhammadu Buhari