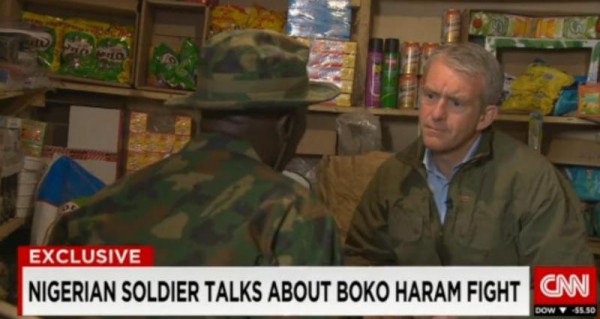 Hours after the exclusive interview with the Nigerian soldiers over Boko Haram insurgency was published by CNN, the military officials accused the famous edition of fabricating stories.

Nic Robertson, the CNN journalist, travelled to Jos to learn more about the condition of the Nigerian military fighting the deadly sect in the North-East.

The report starts as follows:

“Eventually we meet. Hidden in a tiny store, he dares spend only a few minutes with us, wants anonymity, he is not authorized to talk. He is telling the side of the war we never hear, what it’s like to be a soldier fighting Boko Haram.”

The soldier narrates that he has to buy the kits, the uniform by himself, following which we see shocked Nic shaking his head. The interviewer adds that there are “many more stories” provided by the soldiers involved in counter-terrorism operations.

The Defence Headquarters were outraged by the reportage and took to social media to dismiss the information. See their public response below:

The Federal Government and the Military Leadership are concerned, committed and focused on the ongoing fight against terror. The orchestrated blackmail propaganda by entrenched interests as clearly illustrated by the ultra-biased CNN report will not deter the Military.

If it is true that a Nigerian Soldier will willfully go against the rules by speaking without due authorization and misinform the foreign media, then it indicates how deeply committed and how far the interest of these enemies of Nigeria and humanity have gone in trying to undermine and destroy the Military.

The motive of this satanic CNN report should be of concern to all patriots and Nigeria’s well wishers. We believe that appropriate security agencies will also work on the root of this blackmail against the nation. The fight is not for the Military alone.”

Meanwhile yesterday, January 15, Nigeria marked the Armed Forces Remembrance Day. President Goodluck Jonathan commissioned a monument in Abuja in commemoration of military men and women who lost there lives in the North East .