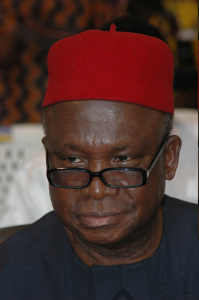 Gov. Martin Elechi of Ebonyi has sought assistance from the Labour Party (LP) to surmount the challenges his faction of the Peoples Democratic Party (PDP) is facing in the state.

Elechi’s supporters, including commissioners and local government chairmen, defected to the LP after losing the primaries to the Deputy Governor, Chief Dave Umahi. Elechi and some of his loyalists, however, remained in the PDP.

Umahi emerged as the PDP’s gubernatorial flag bearer after the party’s National Working Committee (NWC) recognised the primaries conducted by Chief Joseph Onwe, the state chairman of the party.

The governor made the appeal at his country home, Echialike-Ikwo Local Government Area, when he received the state leadership of the Labour Party.

He described the recent events in the state chapter of the PDP as unfortunate, adding that he and his supporters insisted that things should be done correctly.

“You are aware of what happened to us as we insisted that our laws should be obeyed and all party’s rules of engagement, campaign and election must be respected.

“When things are not done in accordance with the law, opportunities for anarchy will be created as we commend you for being in sympathy with us over the travails.

“We pray we overcome the travails as we urge you to assist us in any way you can while we promise that we will remember you when we get to our own promise land,” Elechi said.

He called on the people of the state to vote for President Goodluck Jonathan in the forthcoming general elections because he remained the best candidate in the elections.

“President Jonathan is the best presidential candidate we can offer, as he has proven that he possess the magic wand to salvage the country.’’
The governor commended the party for the visit, and noted that it remained the only registered political party to identify with the state government.

“It is only the Conference of Nigerian Political Parties (CNPP) that has been so liberal to identify with us whenever such functions arise on annual basis.

“This is how politics should be, as in advanced countries, political parties should fraternise with others to strengthen the political process,’’ Elechi said.

Earlier, the state Chairman of the party, Mr Sebastine Obia, thanked Elechi for receiving them, and pledged that the party would continue to identify with his administration’s transformational ideals.

“We want to commend you for your peaceful disposition towards the challenges confronting your administration as it has brought the desired stability and harmonious existence in the state.

“We, however, assure that we will assist in achieving your political goals as we know that you are a leader we can trust,” Obia said.
Obia also appealed to the governor to assist the party in meeting its various needs such as a functional state headquarters, official car, among other needs.

After Signing Agreement To Stay In APC, PDP Says Atiku, Kwankwaso To Return Before General Elections