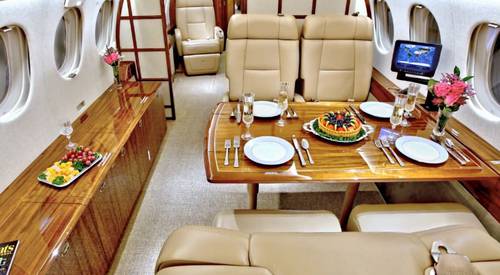 President Goodluck Jonathan wants to ride yet another new aircraft, and he has asked the National Assembly to approve the purchase. Amidst the uncertainty of the Nigerian Economy due to the dwindling oil prices, the request is part of the 2015 budget presented to the National Assembly in Abuja last week by the Minister of Finance, Dr. Ngozi Okonjo-Iweala.

Sahara Reporters say the jet will be the fourth of such purchase since he took office in 2010.

To make the acquisition of the gleaming new toy fit for the electoral stomp an attractive proposition, the presidency will trade in one of the planes currently in the presidential fleet. But the purchase will still gulp N400 million as deposit to the manufacturer.

Towards combating the insurgency in the country, the appropriation bill contains a N1,308,400,600 proposal to be spent on NICEP II security elements phase II by the NSA; N2,093,861,553 for maritime border security solutions (Falcon Eye); N2,093,861,553 for North-East border security solutions and N850 million for the DSS to buy more firearms and ammunition for all the service formations.

Similarly, the Office of the National Security Adviser (NSA), comprising the National Intelligence Agency, the Department of State Security, the Presidential Air Fleet (which manages the presidential fleet of aircraft), has a budgetary proposal of N84,128,320,723.

The budgetary provisions further show an estimate of N150 billion for the National Assembly, and N73 billion is budgeted for the judiciary.

The “Service Wide Vote” is explained as a vote created to serve all Ministries Departments and Agencies (MDAs) for emergency purposes not captured in MDAs yearly budgets, but for which funding has been provided.

Funds are disbursed from the Service Wide Vote with approval from the National Assembly through appropriation, and the Minister of Finance approving the request from demanding MDAs for the funds.