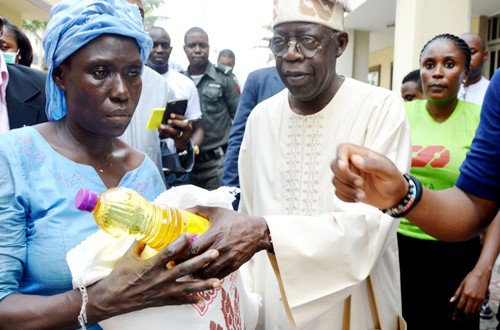 Secretary of the party in the state, Dr Tope Aluko, who made the criticism in a statement in Ado-Ekiti, added that the action of the APC amounted to “hypocrisy at its peak.”

“They abused us for providing immediate succour for our people. They described stomach infrastructure as an insult to Ekiti people.”

“They said it does not add value to the people; that it diminishes their self-esteem, self-worth and that it denigrates what politics ought to be about.

“However, their party leader in Lagos on Sunday adopted the same concept of stomach infrastructure by personally sharing food items to people.

“After condemning the concept, isn’t it rather too late that the APC people are just realising that poverty should be addressed by providing immediate succour?

“Poverty is poverty; it knows no religion and it has no tribal mark; and it affects everyone.

The secretary said that the Fayose-led government would never shy away from the people’s welfare.

“Most importantly, Fayose will provide gainful employment for the youths and assist traders with soft loans so that they can feed themselves,” the statement said

Buhari Gets 44.5 Million Naira For Campaign, Begs Obama For Funding