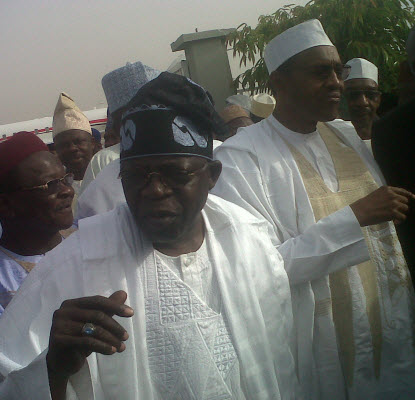 The Peoples Democratic Party (PDP) has said that its flag-bearer, President Goodluck Jonathan is up for the presidential contest in the February 14, 2015 election with the former Governor of Lagos state, Alhaji Bola Tinubu and not General Muhammadu Buhari.

PDP National Publicity Secretary, Olisa Metuh, in a statement on Sunday said the APC Presidential candidate, General Buhari is merely a front for Alhaji Tinubu to whom he has already surrendered his powers and first official assignment of choosing a running mate.

Read excerpts from the statement…….

“In surrendering his prerogative of choosing his running mate, General Buhari has confirmed that he is being appropriated and compromised to serve a personal and narrow group interest of a cabal on whose ticket he emerged as the presidential candidate.

“This APC cabal under the command of Tinubu tampered with all the rules of their party to achieve their selfish agenda of planting surrogates in all strategic positions to enable Tinubu expand his economic and political frontiers the way and manner he did in Lagos state.

“Therefore a vote for General Buhari in the forthcoming presidential election is clearly a vote for Tinubu, his political and economic interests.

“Indeed, the possible calculation of this cabal, if they ever get to power, is to choke-up General Buhari and ultimately frustrate him out of office thereby allowing Tinubu to have total control of the economic and political interests of the nation.

“Therefore the question the citizens want answered remains, ‘is Tinubu the face of the so-called change the APC wants to bequeath to Nigerians?

“The APC and its leadership have clearly shown that to them, national interest is secondary to Asiwaju Bola Tinubu’s business interests, little wonder many are now calling APC ASIWAJU’S PERSONAL CONSORTIUM.”