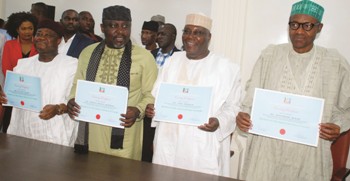 A chieftain of All Progressives Congress (APC) in the South-East, Osita Okechukwu, has accused Imo State Governor, Owelle Rochas Okorocha of allegedly gambling with the chances of the Ndigbo to bargain for Vice President slot in the 2015 general elections, noting that his (Okorocha) failure contributed in weakening that opportunity.

Okechukwu, who is the spokesman of APC in the South-East, in a press statement Sunday stated this while reacting to Governor Okorocha’s statement after his failed bid to get the presidential ticket of the party.
According to him, “His Excellency’s statement is one of self denial, for rather than apologizing to Ndigbo for his gambit, which made Ndigbo to lose the national chairmanship of the APC, placed us in a weak position to vie for Vice President, he is regrettably justifying the unjustifiable.

“One had thought that as a leader he could had placed the collective interest of Ndigbo above his Nollywood show, since he is quite aware of the position of the party as regards zoning.

“For the avoidance of doubt, in a South East Caucus meeting at His Excellency, Dr Ogboninya Onu’s residence at Abuja in July, 2014, some of us agreed that he is eminently qualified to vie for presidency, but given the prevailing understanding that the presidency is going North, we should vie for chairmanship and vice president slots, waiting for the next 8 years when it is coming South. He refused and boasted that he is going to win the presidential primary.

“I personally narrated to him that zoning like every convention has its moral weight, the North having patriotically zoned the presidency to the South. I further persuaded him to go back to Imo State and conclude the good works he is doing so as to present a good legacy, when the rotation comes South, the South West and South South having occupied the coveted presidency respectively since our return to civil rule in 1999.

That Dr Onu should be supported for chairmanship, he backed out”, the statement added.
Defeated Okorocha had said that “by participating in the contest I have been able to prove that the president can come from any part of the country. It is the understanding of APC that the president should come from the North ever since. I know about that, but I don’t like those facts, so I have come to distort those facts which are not the truth”.