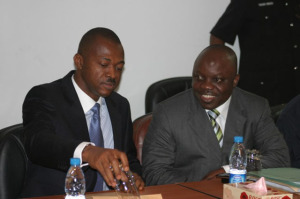 As the Peoples Democratic Party (PDP) begins its primaries to choose its candidates for the National Assembly elections, an intense power play, intrigues and upsets have forced two frontline governors to abandon their senatorial ambitions.

The Delta State Governor, Dr Emmanuel Uduaghan, who pulled out from the race for Delta South Senatorial seat, citing the need for a peaceful electoral process and transition.

The Governor, had been locked in a heated contest with the incumbent senator representing the district, Senator James Manager, who is seeking a fourth term at the Senate, cited the need for a “peaceful electoral process and transition” as his reason for stepping down his bid, adding that it was also in the “general interest of the state and democracy at large.”

Addressing a press conference on Friday in Asaba to announce his withdrawal, Governor Uduaghan observed that his withdrawal from the Senatorial race was in the general interest of the state and democracy at large.

According to him,the first agenda of his administration is peace and security and he will not do anything that will threaten the peace.

He said he had remained committed to bequeathing a peaceful state. “The worst thing that can happen is to be part of the security challenges,” he said.

Dr Uduaghan said he had offered to step down from the Senatorial race to ensure that the tension was reduced and in the overall interest of peace and security in the state.

The Governor stated that he had bought his forms, screened and cleared for the Senatorial seat, but as the person in charge at the state level he had always appealed that elections must not be a do or die affair.

“Unfortunately, there have been a lot of political and ethnic tension that is threatening the peace and security of the state, which has been noticed even at the national level,” he said.

While commending his teeming supporters for their unflinching loyalty and support, Dr Uduaghan stated that the interest of the state supersedes personal interests.

He further told reporters that he was not forced to withdraw from the senatorial race. “Nobody forced me to step down, I owe it to Deltans for the peace and security of the state.

In Enugu, Chief Press Secretary to the Governor, Chukwudi Achife, confirmed the development on Friday. He said Chime was no longer running for Senate. And sources say that the development followed a peaceful agreement between Chime and Ekweremadu.

Sources in the Enugu State PDP added that, in line with the said agreement, the governor will produce most of the party’s key candidates, including the flag bearer in the governorship election.

It is reported that in exchange, Chime had to drop his senatorial bid. It was learnt that the peace deal became imperative after an acrimonious battle for the control of the PDP in Enugu State, between Chime and Ekweremadu, threatened to undermine the party’s fortunes ahead of the 2015 elections.

The party’s State Executive Committee, which is loyal to Chime, immediately appointed Chief Ifeanyi Asogwa as chairman to replace Abba, but the deputy chairman, Elder David Aja, who is a staunch Ekweremadu loyalist, protested, arguing that he should be the chairman.

Ekweremadu appeared to have handed over control of the party after the PDP National Working Committee endorsed Aja as acting chairman, giving him the powers to conduct the ward and national congresses in the state.