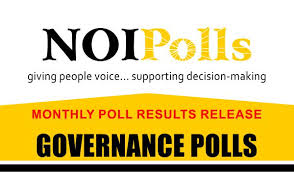 Abuja, Nigeria. December 6th, 2014
This press statement has been necessitated by the malicious story published by SaharaReporters with the sole intent to bring to disrepute NOIPolls Limited and its founder Ngozi Okonjo-Iweala. It is clear that the online website went on a fishing expedition designed to mislead stakeholders and the public with sponsored lies and innuendos.

To state the facts:

NOI POLLS WAS SET UP IN 2006, LONG BEFORE OKONJO-IWEALA RETURNED TO GOVERNMENT AS MINISTER SO IT COULDN’T HAVE BEEN ESTABLISHED TO SUPPORT GOVERNMENT
NOIPolls was founded in 2006 by Dr Mrs Ngozi Okonjo-Iweala, she was not a serving minister nor in Government at this time. Shortly afterwards she went on to become the Managing Director at the World Bank. For Sahara reporters to imply that she set up this company to ‘burnish the image of President Jonathan’ is completely false and again points to a very biased and subjective reporting style that is completely flawed and should be disbelieved. More of this can be seen on our website or on this link http://tinyurl.com/oee7fo4 that showcases our seven (7) years of polling.

IN LINE WITH GLOBAL PRACTICE, OKONJO-IWEALA IS NOT CURRENTLY INVOLVED IN MANAGING THE COMPANY OR ITS DECISION-MAKING
Dr Mrs Ngozi Okonjo-Iweala is also totally de-linked from the company and DOES NOT interfere with the operations. The Company is run by a Management team which is headed by Myself. Again details are all public and have been for as long as this company has existed, why Sahara reporters decided to publish a sensational piece without researching the company points to the incessant need to bully Dr Ngozi Okonjo-Iweala and anything that has her name on it. This MUST STOP. NOIPolls is a going concern with 50 HQ staff members, a workforce of 40+ interns and 300 field operatives. That figure moved up from 5 staff in January 2012 to now clocking almost 400 persons in Jobs that have been created over a 2 year period. That is the testimony of hardwork and commitment by my team to build a sustainable enterprise and promote the true voice of Nigerians which Sahara reporters is desperately trying to squash.

THE MONTHLY OPINION SURVEYS ON THE PRESIDENT’S APPROVAL RATINGS ARE RIGOROUS AND CREDIBLE AND REFLECT BOTH GAINS AND LOSSES IN PUBLIC PERCEPTION FOR THE PRESIDENT
As fair minded and apolitical persons have observed, the approval ratings have not been static: they reflect changes in public perception of the president’s work. Not too long ago, it was 74%. The effort by Saharareporters to discredit the polls is evidently malicious and lacks credibility.

NOI POLLS TECHNICAL PARTNERSHIP WITH GALLUP USA COVERS METHODOLOGY AND SIMILAR TECHNICAL ISSUES; IT DOES NOT MEAN GALLUP IS INVOLVED IN DECISIONS ON THE MONTHLY OPINION POLLS
NOI Polls never claimed that Gallup was involved in the monthly approval polls. WE have been in a technical partnership with Gallup since 2006. First contract was for 5 years, ran from 2007 – 2012. Another was signed in 2013 and is still running. It’s a pity that in the rush to discredit a reputable firm, Sahara reporters have made very obvious mistakes;
The report states that Sahara reporters asked Gallup if they were involved in conducting the November’s approval rating; of course they cannot be involved, we are in a TECHNICAL PARTNERSHIP with Gallup, this means that they have taught us a methodology which we have adapted to the Nigerian context. This partnership does not mean that NOIPolls will have Gallup do all our polls. It means that we have perfected what we have been taught and only review methodology when necessary. To assume and then ask if Gallup is performing polls on our behalf shows the level of thought this report has if at all any. Can we please stop this colonial mentality? Nigerians are very capable of running operations smoothly
Every year NOIPolls and Gallup do a national poll called the NOI-Gallup National survey, this is the flagship product of the partnership AND THE COMMERCIAL ASPECT of the relationship. Gallup mentioned us as a client and that is because they are paid for data collecting on this national survey. Again this reports can be found on the website. So we have both a TECHNICAL and COMMERCIAL relationship with Gallup USA.
The Reporter’s disturbing bias is clearly seen in not understanding the methodology used for the monthly polls, hence asked Gallup if they are, from the US conducting a monthly telephonic poll. Quite laughable being that the reporter also published our methodology.
If Sahara reporters does have staff working for them, a visit to the NOIPolls Opinion Polling Center (the NOPC) would have clearly shown the Pollsters at work in the call center administering the survey via telephones to Nigerians across the country and not sitting at their tables falsifying a poll. This would have represented a fair and unbiased approach to reporting, however obviously this is not their style of reporting. Again showcasing terrible reporting and an intent to discredit NOIPolls and our founder. Also we have OPEN DAYS for the public where anyone is allowed to walk in and see these pollsters at work and try to also make calls and administer a poll.
Methodology as taught by Gallup shows that 1000 sample size is representative of the Nigerian Adult Population (87.9m). Gallup uses same sample size for a population of 350 million Americans. Our methodology is scientifically proven and if Sahara Reporter had done an indepth research on global polling methodology standards, they will realize this.
Finally, we have on our website two members of the Gallup team as members of our team, would we be as bold to do this if no relationship existed? I daresay that Saharareporters was totally mischievous in this approach to questioning the Gallup staff about a monthly poll and not a partnership.
GALLUP HAS AN ESTABLISHED LONG STANDING RELATIONSHIP WITH NOI POLLS
Dr Ngozi Okonjo-Iweala’s excellent relationship with Mr Jim Clifton helped to get the partnership with Gallup off the ground. And we are very grateful with Mr Clifton and Gallup for their support. This partnership will not be broken by this sponsored and malicious report by Sahahareporters.

NOI POLLS IS RECEIVING GLOBAL AND CONTINENTAL RECOGNITION FOR ITS RIGOROUS PROFESSIONAL WORK
Looking at the Gallup’s well being index, NOIPolls has been conducting the Personal Well Being index of Nigerians monthly for 23 months now, we have been given global recognition for this, we are only two African countries doing this survey on the continent. If the reporter again (I am truly tired of saying this) had done the job required of him, he would have seen clearly that our results mirror the same with Gallup findings.

As Daniel Patrick Moynihan is famous for saying ‘Everyone is entitled to their opinion but not to their own facts’. In this case Saharareporters has totally misrepresented the facts and shown a total bias and ineptness to reporting. As we say in NOIPolls, our mission is to ensure that the voice of Nigerians are heard, the voice of one should never represent the voice of many!! In this case, Saharareporters is being used to push an agenda, the voice of one is not acceptable to us! If they disagree with the results of our polls, all they need do is send us an email, we get a lot of those and we respond and ask that the people come in to evaluate our work and methodology. We are a transparent and accountable firm.

This misbehavior on the part of Sahara reporters has to stop! Reporting should never be done this way. The media should always remain objective and ensure they have all their facts correct before going to press. The results from the polls are key to the work of our media partners all over the globe. The ability to rightly analyse and interpret the results is obviously what is missing in Sahara reporters capabilities and so the sudden flight to finger pointing and discrediting.

Finally, I would like to thank you for taking out time to read this long press release, NOIPolls has worked really hard and still is, to champion the importance of opinion research across the region and the continent. We have put Nigeria on the global stage by changing the narratives about our beautiful country. At last the voices of Nigerians are being put on a platform and on display for the world to see. We are telling our story! Shame on those that have chosen to disrupt a change process that is long needed in this country.