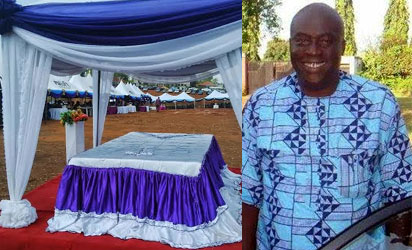 Vanguard is reporting that there was pandemonium yesterday at Amechi, Nkanu-West Local Government Area of Enugu State as the community could not come to terms with former governor of old Anambra State, Senator Jim Nwobodo over where his,son,Jim, Ifeanyi Nwobodo Jnr would be buried.

It was a show of shame at Amechi Awkunanaw in Enugu State as the burial ceremony of Dr. Ifeanyichukwu Nwobodo, the late son of former Governor of Anambra State, Chief Jim Nwobodo turned awry as Nigerians from all walks of life waited in vain for the arrival of the corpse.

News had filtered in early in the morning that the corpse of the deceased disappeared from the morgue.

Dr. Ifeanyi Nwobodo Jnr, had on November 16, 2014 died of cancer, was to be buried yesterday as planned by the family.

A source told our Saturday Vanguard that his corpse was snatched away following a crisis among members of the clan and the former governor.

Trouble had started when the former governor chose a venue outside the family compound for the burial of the deceased, a decision which was stoutly opposed by other members of the family.

A family source said Jim decided to bury Ifeanyi outside the family house, on the notion that he (Ifeanyi) lost all his rights as a son by dying before his father.

However, other members of the family, as well as Awkunanaw youths, who were not happy with such decision, insisted that he would not buried elsewhere. Following the deadlock, Saturday Vanguard gathered that some yet-to-be identified members of the community made straight to the morgue and took the corpse away.

For several hours, some past and serving Governors, including the Deputy Senate President, Ike Ekweremadu, waited endlessly amidst the frustration. After a long fruitless wait, Ekweremadu, and other dignitaries stormed out of the venue.
As the confusion persisted, the Archbishop of Enugu Ecclesiastical Province of the Anglican Communion, Most Rev. Dr. Emmanuel Chukwuma, waded into the matter and held a stormy meeting with all the warring parties.
At the end of the meeting, which lasted for several hours, the Archbishop volunteered to allow the family bury the deceased at the St. Mathew’s Anglican Church Amechi Awkunanaw.