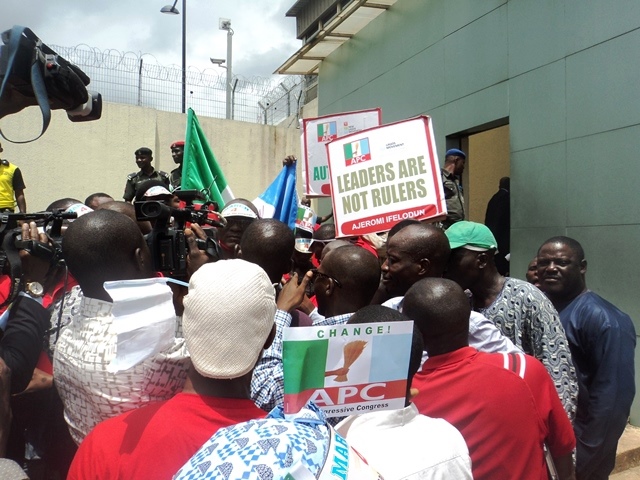 The Chieftain and national leader of the All Progressives Congress, APC, Bola Tinubu, has appealed to all the aspirants for the party’s governorship candidate at the ongoing primary election in Lagos to accept whoever emerges winner as the party’s choice.

In a goodwill message to the aspirants, delegates, and party members on Thursday, Mr. Tinubu, hailed all the aspirants for being good democrats. “I want to use this opportunity to commend all the aspirants. You have toiled hard and sweated for the good of the state,”

Mr. Tinubu said in the message read by party’s Publicity Secretary in the state, Joe Igbokwe. “You all have acquitted yourselves very well by selling your vision and not by tearing each other down. This is as it should be and must be.” Over 6,000 delegates from 20 local governments across the state have assembled at the Onikan Stadium on Lagos island, to elect the party’s flag bearer out of the 13 aspirants.

Ahead of Thursday’s primaries, about 10 of the aspirants had called for a suspension of the exercise on the grounds that the procedure for selecting the delegates was flawed. But on his message, Mr. Tinubu urged all the aspirants to accept the winner of the primaries as the party’s choice. “When I met with all of you, you spoke of the need to ensure a free and democratic process.

Today, you have that process,” Mr. Tinubu said. “However, we must be realistic. There are 12 good men seeking one post, only one of you will win this position. “Accept the winner as the choice of the party that we may move forward and continue the project we highly seek. “You are 12 aspirants, and like the 12 tribes of Israel, let us work together.”

It seems the appeal earlier fell into deaf ears as almost all the governorship aspirants at the ongoing APC primaries in Lagos have left the venue of the exercise, PREMIUM TIMES reports.

Akinwunmi Ambode, Ganiyu Solomon, and Leke Pitan are the only ones out of the 13 aspirants left at Onikan Stadium as at 6p.m. It is unclear why the aspirants left midway into the exercise.

Earlier, Peter Obadan, chairman the Election Committee, had appealed to the aspirants to monitor the exercise and channel any grievance to the committee.

Tokunbo Wahab, the youngest aspirant in the race, left about 30 minutes ago. Femi Hamzat left two hours ago. Adeyemi Ikuforiji, who was the first among the aspirants to arrive the venue at about 9 a.m., and left soon soon after delegates began voting by1p.m. As at 6 p.m., delegates from eight out of the 20 local government areas of the state has cast their votes.

2015 Guber Primary: Benue APC Leaders In Free For All