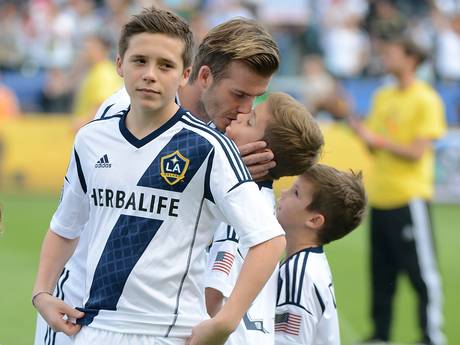 David Beckham has been involved in a car accident after picking his eldest son Brooklyn up from a football match.

The former England captain and 15-year-old were left “shaken” but unhurt after the incident, while two passengers in the other vehicle were also reportedly uninjured, Independent UK reports.

Brooklyn had been playing for Arsenal’s under-16s against Brighton and Hove Albion at London Colney in Hertfordshire. He joined the London squad on a short-term contract earlier this month.

Two members of the Brighton team are understood to have seen the collision with one player, Archie Davies, tweeting: “David Beckham looks like he got in a car crash and hurt his shoulder.”

Another, Thomas Cadman, wrote about how “weird” it had been to play against Brooklyn. “Even weirder to be currently stuck behind David Beckham as he has crashed his car,” he added.

While both Beckhams were able to walk away from the accident unscathed after their air bags deployed successfully, their Audi RS6 was rendered unusable and damaged on the driver’s side, according to reports.

Police were called to the scene at 1.29pm on Saturday, the BBC has confirmed.

Beckham has been involved in road accident previously, when he collided with another car while leaving his Beverley Hills home last October.