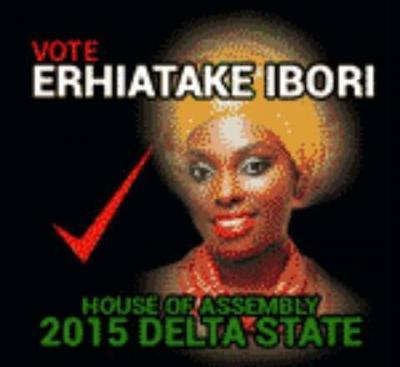 Daughter of Nigeria’s James Ibori, who is is serving a Jail sentenced in the UK for money laundering is said to be contesting for a seat in the Delta State House of Assembly if the posters made public are correct ahead of the polls.

Erhiatake Ibori may likely be contesting to represent Ethiope West Constituency. She is said to be one of the daughters of former governor Delta State governor, James Ibori, a former Nigerian State Governor sentenced to 13 years in jail in 2012 on 10 counts of conspiracy to defraud and money laundering.

Her aspiration was confirmed by a poster reportedly displaying her intention at strategic locations in the state. The poster did not indicate the political party but James Ibori though locked in a UK Jail remains a powerful power broker in the politics of Delta state.

Sources tell NewsWireNGR that aspiring politicians have had to pay him consultation visits even while he’s in prison expressing interests in various political positions in the state. While in detention, he floods National Dailies during his birthday celebration an occurrence that gives credence to the enormous political powers he wields.