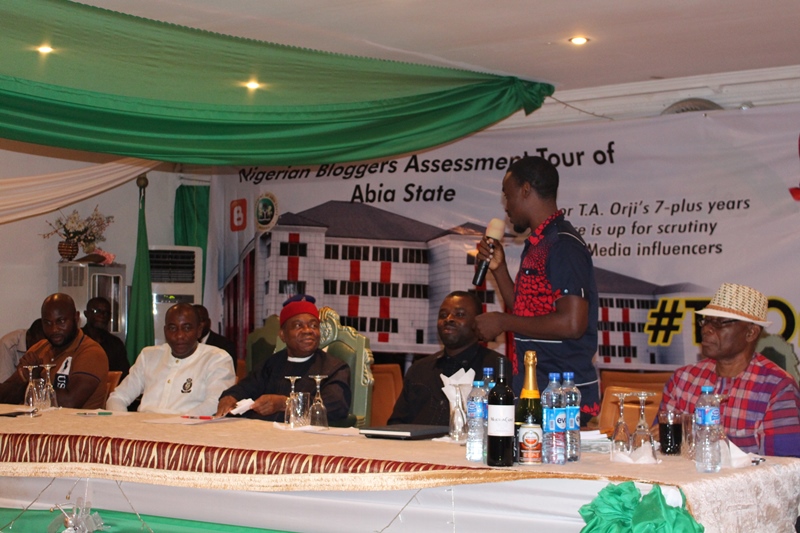 Governor T.A Orji who recently hosted bloggers in Umuahia the Abia State capital is the second governor in Nigeria to actively engage the online community in what can be said to be a participatory system of governance. The first was Governor of Ekiti State

“I do not call you bloggers, I do not call you media people, I call you advisers, because when you talk, I adjust” this was how Theodore Orji began the interactive session with bloggers who came to attend the assessment tour.

Governor Orji lamented at the bad publicity the administration had been receiving over the years and blamed this on political infrastructures in existence long before he became governor of the state.

“Some people go and dig up pictures from over ten years ago and upload on Social Media to tell others that this is what is obtainable now in Abia state, but this isn’t true. It is all negative propaganda” Said Orji while addressing bloggers during the interactive session which ended the five days tour.

The bloggers went through Abia state on a guided tour headed by the former Minister of Information Chief Eze Chikananya and visited several parts of the state which had developed online attention and debates about their current conditions. Places such as Ikot Ekpene road Azikiwe Road, Ariaria Market, Aba main park, Osisioma park, the Aba town hall, the Umuahia mechanic village, the Ubani market as well as an ongoing residential hub for the state at the Ogurube layout where all visited by the bloggers in the five days tour.

These parts of Abia State and a host of others have long been contested in among the online community as reference points for measuring infrastructural development under the T.A Orji administration.

Other towns visited were Ovim, Enugu/Port Harcourt road, and several parts of Umuahia Township, as part of the assessment tour aimed at helping bloggers and Social Media influencers see first-hand, the projects they have been debating about on various platforms.

“You are here to see these projects for real, not the type of ‘intellectual gymnastics’ you see people doing on Social Media.” Stated Chikananya Eze to bloggers during the tour.

The bloggers were culled from different parts of the country, alongside political analysts, political pundits, and media personalities for the event, which has become a yardstick of some sort to the online community.

Speaking at the event, Leader of the delegation who is also a blogger and former President of Abia State University Chinedu Ekekee described the enormous task of bringing together some of the most critical online personalities for an engagement session with the governor about his administrations contribution to Abia state.

“The first time I spoke to the Special Adviser to the Governor on e-Governance Obed Nnaji, I was rather skeptical of attending such an event. But my personal mandate of remaining an independent and objective political analyst and my influence as a blogger increased the demands that I had to be there.”

Abia State governor Theodore Orji has hinted that he may pick up the mandate of the people of Abia who have suggested that he remains within the political machinery of the state as a Senator. When asked by a resident reporter whether he had not already given enough to the people of Abia in his lengthy years of service, Orji replied

“Well, this question is one which should go to the people. I was afterall constitutionally elected by them.”

The bloggers are expected to make assessment reports of their tour in Abia state during the recently concluded exercise and this may be a precursor on the views of residents in the coming elections where T.A Orji who is more popularly referred to as Ochedo global may return to the state as a sitting Senator.

London’s Airspace Locked Down Over Computer Failure At Control Center