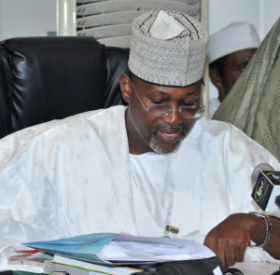 National Chairman of the Independent National Electoral Commission, INEC, Professor Attahiru Jega, has issued a query to Resident Electoral Commissioners, RECs, in the South for not going along with the suspended lopsided and illegal allocation of 30,000 Polling Units, PUs.

Jega yielded by suspending the controversial allocation of the additional 30,000 Polling Units, PUs, there are strong indications that there is yet no retreat no surrender on the part of those pushing an agenda to use INEC as an instrument of rigging next year’s general elections. 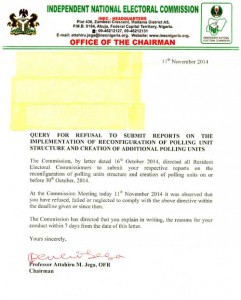 The fresh discovery by Sunday Vanguard is going to the wrought through the instrumentality of the distribution and allocation of voting materials on the day of election (read logistics). That is not all. The main drivers of the Commission are also set to redeploy Resident Electoral Commissioners, RECs, of northern origin to the South to handle the 2015 elections because of the belief that some RECs in the South did not go along with the disguised rigging plot based on the lopsided allocation of the PUs. Already, Jega has sent out a threat to the RECs in the South.

This is not unconnected with the failed attempt by some individuals at the Commission, who misled its Chairman, to create additional 30,000 Polling Units, PUs, which were then shared in a most bizarre manner, giving the North over 21,000 and allocating a little over 8,000 to the entire South of Nigeria.

A copy of the query, in the possession of Sunday Vanguard, is seething with rage. Issued on November 11, 2014 – the day the Commission bowed to national pressure on the lopsided allocation of the PUs – it was signed by Jega himself.