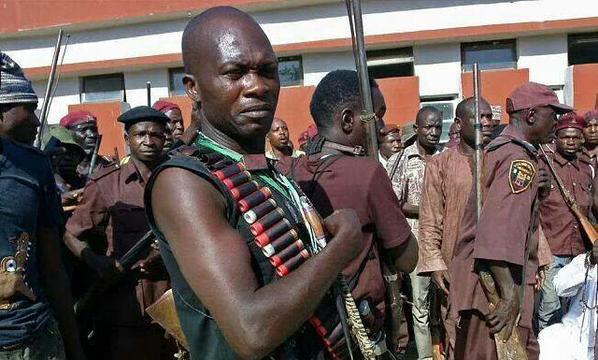 At least 75 Boko Haram militants were killed by local hunters in Maiha Local Government area of Adamawa State, residents of the area have said.

Maiha town, which is about 25 kilometers from Mubi town that was captured about two weeks ago, and about 200km from Yola the state capital, has now been recovered from the insurgents.

Maiha fell into the hands of Boko Haram insurgents in a fierce battle with the Nigerian troops on Monday.

Sources say local hunters ambushed the insurgents and killed them in their dozens.

“The hunters mobilized and gave the insurgents hot chase during which many Boko Haram sect members are killed,” Bello Ya’u, a resident of Maiha, said. ‘’We commend them for the gallant fight.”

Baba Dauda, a local hunter told newsmen that the hunters made up their minds to fight because the insurgents had been maiming too many people.
“We had to wake up and fight the bastards that keep plaguing our societies killing innocents souls.

“People should brace up and start fighting them, we killed many of them. We are not afraid of being killed,” he added.

Following the attack, some residents of Maiha now fear reprisal attacks and are moving in droves to the capital of Adamawa, Yola.

Mr. Goni said the volunteers resolved to use dane guns, sticks, bows and arrows to confront the insurgents, thereby complementing the efforts of Nigerian soldiers fighting the terrorists.

The insurgents have taken over many towns and villages in Adamawa State, including Madagali, Michika, Mubi North, Mubi South and many others.