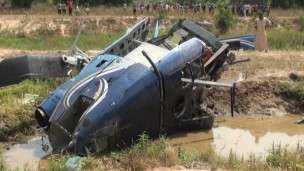 A helicopter flight fell in the area Gireiwa  Local Government of Adamawa State in north – eastern Nigeria on Monday .

Some journalists who came to the crash told the BBC that the four people on board three pushing the whole and all have survived .
Reports also added that there is a possibility of flight of a spy , because he did not like the planes attacks in the region .

Nigerian military officials later sealed off by the crash and prevented journalists reach where he is  according the BBC Hausa Service.

So far, no statement has come from the Nigerian authorities about the crash .

Residents of the area said the helicopter crashed close to the temporary camp of the National Youth Service Corps, NYSC, which is now being used as a camp for Internally Displaced people in the state.

Jonathan Sympathise With Parents Who Lost Their Children In Potiskum