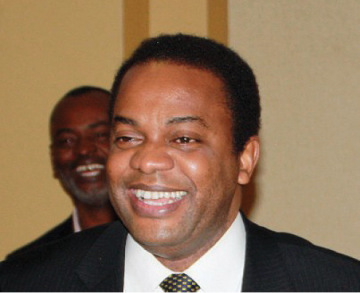 It seems the former Governor of Cross River State, Mr. Donald Duke, can no longer hold his silence over the activities in the states as it relates to his successor and former friend Governor Liyel Imoke.

What has led to their disagreement is however not clear but the two fell out long ago, leaving Duke to quit participation in active Politics and the ruling Peoples Democratic Party in the state.

Duke who took a swipe at Liyel for allegedly dividing the PDP in the state, spoke in Calabar at a rally held in honour of one of the party’s governorship aspirants, Mr. Goddy Jedy-Agba on Thursday.

Duke who is said to be backing Jedy-Agba, had the following to say about Governor liyel who has used his company and his wife’s to execute all the contracts in the state. A situation Donald now described as two monkey companies.

Sources in the state accuse the incumbent Governor Imoke of not only chasing away only the contractors that worked in the state but only admitted his own company and the other owned by Obioma Imoke, his wife.

The People’s Democratic Party in the state are currently in different factions as the governor is said to be backing Owan Enor, former House of Reps member against Victor Ndoma-Egba who wants a come back at the senate for the same position.

Former Govenor Duke questioned why Liyel has deliberately ignored the aspirants even when he’s been supporting others. “He gave his nod to everyone that came to meet him for their governorship aspiration, but he refused that of Jedy-Agba, why?” . Duke said,

Making a jest of Imoke’s campaign slogan which is ‘Monkey work, monkey chop,’ Duke said the only two monkeys in the state where two companies.

He said everyone would have a say in who becomes the next governor and not just one person.

According to him the governor was giving the impression that aspirant would be provided with a level-playing field while he (Imoke) has someone in mind.

The relationship between the two has gone sour over the years. Donald Duke, Liyel Imoke and Gershom Bassey are the known “Three wise-men” of Cross River State that promised to rotate power within themselves but that calculation is said to be changing as the people of Cross River North are insisting on producing the next governor of the state.

Will Adamu Mu’azu Be Removed As PDP National Chairman?