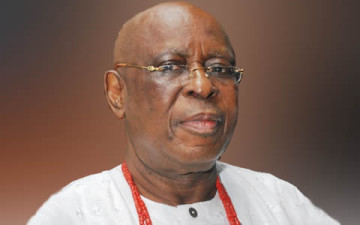 A former governor of Ogun State, Chief Olusegun Osoba, and the Deputy Governor, Segun Adesegun, have defected from the All Progressives Congress to the Social Democratic Party.

A reliable source, who made this known on Wednesday, also said that the three APC senators from the state and six members of House of Representatives had joined the SDP train.

News of their defection coincided with the resignation of Governor Ibikunle Amosun’s Senior Special Assistant on Environment, Abayomi Odunowo.

Adesegun had on October 24 sent a stinker to Amosun, accusing him of starving his office of funds, and allocating old vehicles to him.

In the letter personally signed by him and published exclusively on October 29, by The PUNCH the deputy governor advised Amosun to fear God and warned that he might not win the next governorship poll in the state.

A part of the letter read, “Your Excellency, while writing this letter, my thoughts race to my university days in Ile-Ife, Osun State where I joined a group of bikers travelling around the country out of youthful exuberance.

“During this period, one of my pastimes was reading inscriptions on cars and buses to amuse myself. In 1978, I witnessed a fatal accident near a big tree at Alakia Junction in Ibadan on the way to Ile-Ife involving a white Peugeot 504 station wagon. Nearly everybody in the car died; shockingly there were several amulets hung over the car that had the word “I shall return” boldly inscribed on both sides. Unfortunately, it did not return. I therefore conclude that we all must fear God.”

Kaka and Obadara confirmed the defection of the politicians during separate telephone chats with our correspondents.

One of our correspondents had asked the Senator if the Osoba group had left the APC, he replied “Something like that.”

When asked to be specific on Osoba and Adesegun, he said, “All of us; we will soon have a formal unveiling.”

Kaka also disclosed that Osoba and the National Assembly members loyal to him had started consultations and sensitisation visits to the Local Government Areas in the state.

He said, “What we are doing currently is that we are going about to the local governments to sensitise the people of the need to register and get their permanent voter cards.

“But we have not formally defected. You know that if someone wants to defect to another party, it must be done formally, so we need to do that.”

On his part, Obadara said, “Yes, I am in the SDP. But it has not been made formal; we are in the process of making it formal. In fact, all the senators and members of the House of Representatives are also in the SDP.

“We are out to rescue Ogun State from recklessness and provide good governance. We are not going to run a government of my friends, my school mates and my family.”

When contacted , Adesegun said he would always be in a party where his leader(Osoba) belonged.

He said, “Osoba is our leader, I am talking about politics in Yorubaland. Nobody can create leaders for us in Ogun State.”

Efforts to speak with Osoba did not yield any result, as he neither picked a call made to his telephone line nor responded to the text message sent to him on the matter.

When contacted, the state commissioner for Information and Strategy, Yusuph Olaniyonu, said, “It is purely a party affair.”