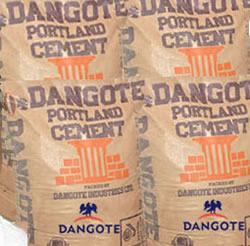 Dangote Cement Plc has announced a 41 per cent reduction in the prices of cement, with the different grades of the essential commodity now selling for between N1,000 and N1,150, exclusive of Value Added Tax, reports the News Agency of Nigeria.

In the new price regime announced on Sunday by the Group Managing Director, Dangote Cement, Mr. Devakumar Edwin, a 50kg bag of the 32.5 cement grade will now sell for N1,000, while the higher 42.5 grade is to sell for N1,150 per bag instead of the current N1,700 that both grades were going for.

Edwin said in a statement that the move was in line with the company’s commitment to the nation, especially the need for the development of infrastructure and boost ongoing efforts to reduce the near 20 million housing deficit in Africa’s largest economy.

“We recognise the need for a dramatic increase in the response to the huge infrastructure and housing deficit in the country, and one of the ways of addressing the issue is bringing the price of building materials down to much more affordable levels, especially cement, which is within our own control as part of our contribution to the transformation agenda of the President Goodluck Jonathan administration and the attainment of key milestones in the Millennium Development Goals,” he was quoted as saying.

During the period, over $20bn has been directly and indirectly injected into the Nigerian cement industry with Dangote Cement Plc accounting for 60 per cent of that expenditure.

Edwin also said that Dangote Cement would continue to ensure the alignment of its corporate social responsibility with its strategic business initiatives, and would continue to evaluate its pricing regime in the country’s best interest.

According to the statement, stakeholders have commended the price reduction and say the cement market is entering the high demand phase as the dry season, which provides the opportunity for increased construction and building activities, is setting in.

In compliance with the directive of the Standards Organisation of Nigeria on the various grades of cement and their prescribed uses, Dangote Cement recently inaugurated its brand of the premium 32.5 grade, which has been restricted to plastering use only.

The largest cement producer in Nigeria noted that the move was to develop a full bouquet of cement types to meet the varying needs of consumers for the different purposes.

The company produces the 42.5 grade for column casting, block making, decking and other general purpose construction works that require high strength, while the 32.5 grade is for rendering or plastering.

The company also produces on demand the 52.5 grade for specialised construction of high strength structures such as bridges, flyovers and sky scrapers, among others.

Dangote Cement said in compliance with the SON standard for cement quality and packaging, the lower 32.5 grade would be clearly labelled in order to minimise the incidence of building collapse arising from the misapplication of the different grades of cement.

To Meet The Expectations Of The People, Fayose Urges Ekiti To Pay Taxes