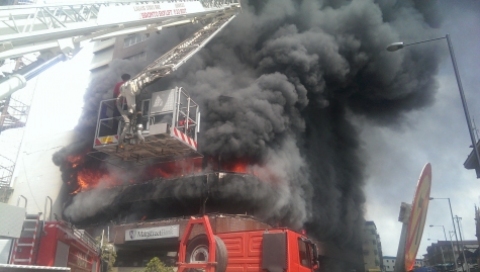 The Peoples Democratic Party, PDP, Secretariat along Port Harcourt/Aba Expressway in Port Harcourt, has been set on fire in the early hours of today by unknown persons after tying up the security guards on duty.

Jerry Needam, the Special Adviser to Felix Obuah, Chairman of PDP, on Media who confirmed the incident said early arrival of state fire service helped to put out the fire.

Also confirming the fire incident, Obuah said that “An attempt to burn the party secretariat has being carried out by desperate politicians who want the party to postpone the party’s ward and local Government Congresses scheduled to take place tomorrow, Saturday. They have failed because arrangements have concluded and we are going ahead. Nobody can stop it. PDP will come tops”.

“We have watching on news of some desperate politicians threatening the party.”Obuah said.

The fire incident this morning is happening 24 hours after 15 Governorship Aspirants held a mega rally insisting on rotation of power in the Peoples Democratic Party, PDP, at the Liberation Stadium. Many of whom urged President Goodluck Jonathan and national leadership to intervene in crisis rocking the state branch of the party allegedly hijacked by the Nyesom Wike, former Minister for Education who also has ambition to be governor.