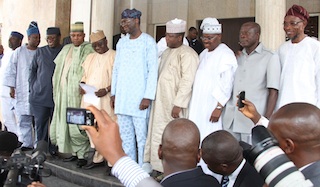 Fourteen Nigerian governors under the banner of the All Progressives Congress (APC) are meeting in Ilorin, Kwara State today.

The meeting to be held at the Council Chamber of the Government House, will be hosted by Governor Abdulfatah Ahmed.

Governor Rochas Okorocha of Imo, Rabiu Kwankwaso, Kano, Ibrahim Geidam of Yobe and Kashim Shettima of Borno and Rotimi Amaechi have arrived at the meeting.

A source and member of the APC National Executive Committee (NEC), who pleaded for anonymity said the meeting is to take another look at article 20 (iii) of the constitution to remove any ambiguity.

” If you recall, the Buhari campaign raised the issue that the modified direct primaries agreed upon by the party was alien to our constitution. Since we do not want to give anybody any excuse to go to court we have to make things right.” The source stated.

The National Publicity Secretary of the party, Alhaji Lai Mohammed, had said, “Our (planned) amendments are varied. One of them is to ensure that our own constitution is in tandem with the Electoral Act, especially as regards the issue of electing our candidates. Like we explained, the Constitution makes provisions for electing candidates but the Electoral Act says that the rules and the Constitution of the party must be explicit whenever they want to use indirect primaries. We don’t want anybody to be in doubt about what we are doing.”

He further explained that the amendments being proposed were beyond the issue of number of delegates or mode but intended to have far reaching implications for administering the party. It was further learnt that the governors were also planning to use the Ilorin meeting to honour the immediate past governor of Ekiti State, Kayode Fayemi, with a valedictory session.