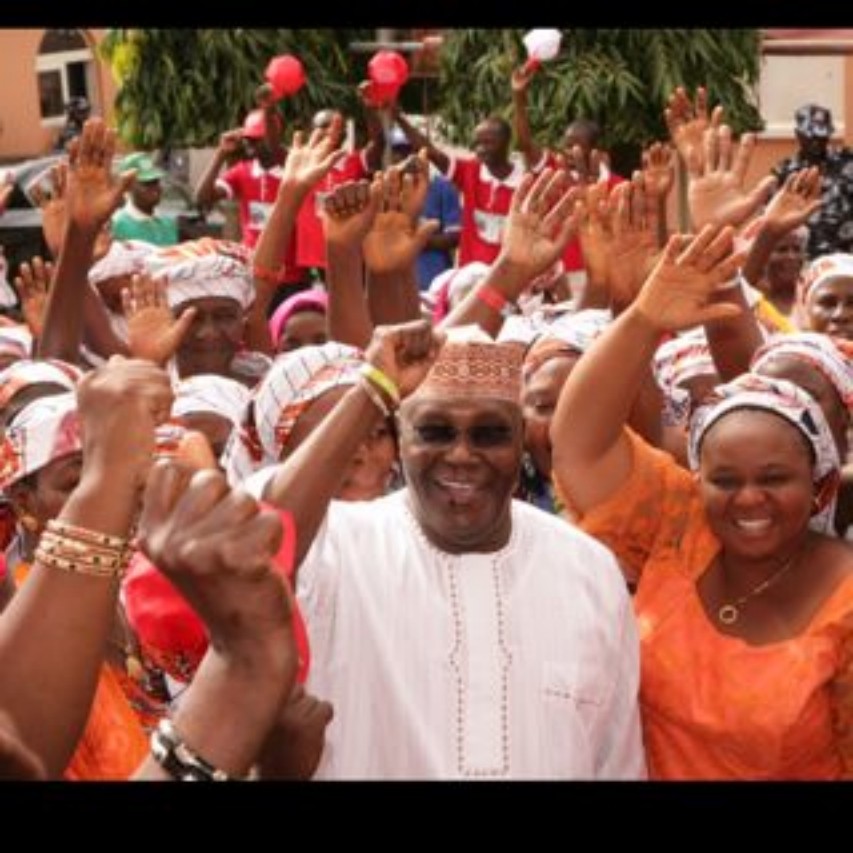 Currently, there are four individuals who have signified interest in vying for the presidency on the platform of the All Progressives Congress (APC). They are Sam Nda Isaiah, Atiku Abubakar, Rabiu Musa Kwankwaso and Muhammadu Buhari. This series will serve to introduce each aspirant and provide information about them. Today, we begin with Alhaji Atiku Abubakar.

Who be dis Atiku sef?

Alhaji Atiku Abubakar is a renowned Nigerian businessman, philanthropist and ex vice-president who has made immense contributions to the growth of democracy in Nigeria.

Born 25th November, 1946 in Jada, Adamawa state, Atiku Abubakar – an only child – lost his father to a drowning accident at the tender age of 11. The task of raising him, therefore, fell on his mother and together, they went through many challenges. Despite being rendered homeless and having no other option than to grow beyond his age and assume responsibilities clearly not meant for a child, Atiku rose from struggling to put food on his mother’s table to striving to touch as many lives across Nigeria as possible. His story is one which inspires hope and serves as a lesson in hardwork and tenacity.

Okay…So where did he get his education?

His quest for education began at the Adamawa Provincial Secondary School in 1960, from where he proceeded to the Nigeria Police College, Kaduna, in 1965. However, due to his less than stellar math skills, he was unable to secure a satisfactory O’Level result in math and had to leave the police college. The future, however, had something even better in store for him, as he eventually became the recipient of a scholarship to obtain a Diploma in Law at the Ahmadu Bello University Institute of Administration in 1967.

Upon graduation in 1969, he was employed by the Nigerian Customs Service, where he served diligently for two decades. It should be noted that despite being in several positions of authority, his was a record without blemish and not once was an allegation of corruption levelled against him. In fact, the only time he got ‘in trouble’ throughout the duration of his Customs career was when he spoke the truth about the refusal of a VIP to follow due process.

Well, talking about politics, how do we know that he has political acumen? Does he have the prerequisite experience to lead this country?

Atiku’s contribution to the development and actualisation of Nigeria’s democracy cannot be overemphasized. Mentored by the late Shehu Musa Yar’Adua, his foray into politics began shortly after he resigned from the Nigerian Customs Service in 1989 and he has remained active till date. He won the Adamawa State SDP gubernatorial primaries in 1991 but was barred from contesting by the Federal Government. In 1992, he took part in the SDP’s presidential primaries but lost, and despite an agreement to be the winner, MKO Abiola’s running mate, Babagana Kingibe was announced as the Vice Presidential candidate instead. In December 1998, Atiku won the Adamawa gubernatorial election but went on to become Vice-President to President Olusegun Obasanjo in 1999.

As Vice-President, he was in charge of the economy in the first tenure and oversaw the privatisation of public enterprises and also went on to record such achievements as reducing foreign debt, curbing inflation and implementing telecoms reforms. During his second term as Vice-President, he fell out of favour with President Obasanjo for opposing and fighting against the latter’s third-term agenda.

In 2006, Atiku emerged as the presidential candidate of the Action Congress. His presidential bid was frustrated and eventually, after a fierce legal battle against his unconstitutional disqualification by INEC, he came third at the polls, after Umar Musa Yar’Adua and (Rtd.) General Muhammadu Buhari.

In 2011, Atiku once more signified interest in leading our great country, but lost at the PDP presidential primaries to President Goodluck Jonathan, the incumbent president whose tenure has ushered in an era of insecurity, incessant bloodshed and terrible economic and living conditions for millions of Nigerians.

Now, Atiku hopes to become the APC’s official flagbearer at the 2015 polls, and has shown how much he values Nigerian youths by implementing a youth-driven campaign and giving issues which concern youths topmost priority. His campaign has been described by many as issue-based, a sharp departure from the sentimental norm as obtained in the Nigerian political space.

Hmmmn….So what does he intend to achieve as President of Nigeria?[1]

Atiku plans to CHANGE NIGERIA (in line with his party, the APC’s vision) “by;

Corruption – How did he get so wealthy?

That Atiku is wealthy is a fact that cannot be contested and even he does not try to deny it. With business interests spread across various sectors – food, education, real estate, oil and gas – many Nigerians wonder (and are absolutely within their rights to do so) about just how he came to amass such a fortune. This is a question that he has answered many times and the basics of how his business empire grew, according to him, are as follows;

Why does he have such a large family?

Polygamy is a part of African culture and while not all aspects of our culture are exactly desirable and should be encouraged, the fact remains that polygamy is only an issue when the man has a larger family than he cater for. Basing any form of criticism at all on this also amounts to attacking the personality instead of objectively analysing the message, and could also be seen as being borne of intolerance since Atiku, a Muslim, is within his religious rights to have more than one wife.

Also, being an only child, Atiku finds companionship in his wives and children; something that was missing in his childhood. His need to have a large family can be compared to the desire of someone who grew up lacking a particular thing (shoes, for instance) going on to acquire such an item in large numbers in his adult years. What matters most is that this man is responsible for his family and not only does he manage his family effectively, he also goes the extra mile to touch the lives of thousands of other Nigerians.

Why does he keep contesting?

Atiku has explained several times that his desire to lead Nigeria is not borne of personal reasons, but because he wants to give back to the country that has given so much to him and touch the lives of more Nigerians across board.

Er….What if I’m still not convinced and want to know more?

You should be curious and you should ask questions. You have every right to seek for information about someone you plan to entrust the affairs of your country to. Please do visit atiku.org for more details or follow @atiku on twitter.

Next, we discuss Governor Rabiu Musa Kwankwaso of Kano State.

Rinsola Abiola is an advocate for youth and women inclusion in politics, and can be reached on twitter via @Bint_Moshood

Aham Njoku: APC, PDP And The ‘Bring Back Our Girls’ Campaigners