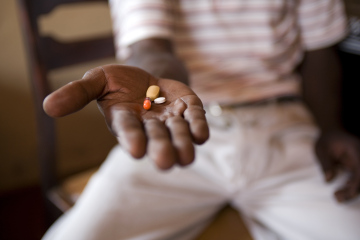 The Federal Government has concluded plans to spend N1,593,287,500 on a one-day political jamboree disguised as HIV/AIDS conference in the Federal Capital Territory.

Findings by Nigeria’s PUNCH Newspaper indicated that the event would be used to market President Goodluck Jonathan’s ‘achievements’ in the health sector, particularly, the progress purportedly recorded against the AIDS pandemic.

Interestingly, it was learnt that the Federal and the state governments did not purchase any anti-retroviral drugs in 2013 for about 3.4 million Nigerians estimated to be living with the HIV virus.

Health officials confided in correspondent ADELANI ADEPEGBA that the percentage of HIV patients under treatment had dropped, adding that all the surveys conducted to measure the outcome and impact of HIV in Nigeria were being funded by implementing partners.

Ironically, the Minister of Health, Prof. Onyebuchi Chukwu, was not involved in the packaging of the HIV/AIDS conference. The conference is being handled by the office of the Secretary to the Government of the Federation, the National Agency for the Control of AIDS and the Joint United Nations Programme on HIV/AIDS.

Investigations showed that the idea of the conference was sold to the SGF, Senator Pius Anyim, by the Country Director for Nigeria, Joint United Nations Programme on HIV/AIDS, Dr. Bilali Camara, before it was presented to The Presidency for approval.

In a letter dated April 30, 2014 with reference number: UCD/L34/30/04/14, addressed to Anyim, Camara, a Gambian, stated that the UNAIDS was prepared to support the SGF to launch the political component of AIDS to sell the candidature of Jonathan in the forthcoming elections.

“UNAIDS is well prepared toThe letter partly read, support the leadership of his Excellency (Jonathan) in preparing this component of his political agenda of the upcoming elections and to provide technical support for the national programmes aimed at eliminating HIV among children during the implementation phase of this visionary objective.”

The UNAIDS Country Director, by international work ethics, was not supposed to meddle in local politics.

Attempts to get Camara’s reaction did not succeed as calls to his phone indicated that it was not available. PUNCH reports that the ceremony had been scheduled to hold after Jonathan’s declaration for re-election, and it would be graced by the President, Vice-President Namadi Sambo, principal staff of the National Assembly, state governors and visiting Heads of Governments and diplomats.

A concept document which detailed how the N1.59bn approved for the rally would be spent, noted that Nigeria had recorded a 20 per cent reduction in new HIV infections among children.

When contacted, the Media Assistant to the SGF, Sam Nwaobasi, said the ceremony was not a one-day event, adding that it would be a nationwide programme. He stated that the N1.58bn budget was not final, noting that it was still subject to review by the government.

Nwaobasi said, “The concept note for the programme was developed by senior officials and the amount you saw there was not the final budget, it may still be reviewed. I want you to know that the event is not a one-day programme as you said, and the budget is for a lot of things, including mobilization of participants and their movements across all the states to show the success recorded in the fight against the HIV/AIDS scourge and to combat the mother-to-child transmission of AIDS virus.