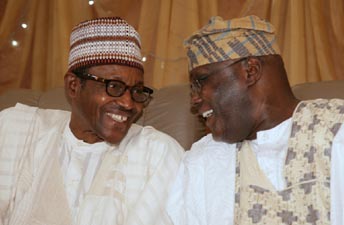 There were report in some media that Tinubu prefers former military Head of state, General Muhammadu Buhari over Atiku. But Atiku has said that Tinubu remains the party elder statesman and neutral

“We have no knowledge of that (Tinubu’s support for Buhari); we have no evidence of that. All we know is that he has resolved to play the role of a statesman and to stay above the fray. There is nothing on ground to suggest to us that Tinubu has moved away from that position.”

In what reports described as a veiled reference to Buhari, Atiku had in a statement issued on October 2, 2014 said, “I believe that the next president of our country, who, by the grace of God, will be produced by our great party, must be someone who is a unifier, bridge-builder and not someone who bears ethno-religious bias. Above all, he must embody a vision of a Nigeria for all.”

However, Shehu has nothing to do Buhari. He said that indeed Nigeria does not need a fanatic but at time did Atiku refer to Buhari as a fanatic

He said, “We did not say that. If you read our statement, it is not saying that. If you go to the market and make a general abusive statement, if somebody raises his hands to say ‘I am the one he is referring to,’ that is his own choice.

“I am sure Gen. Buhari himself will agree that the country doesn’t need a fanatic. And we didn’t say he is a fanatic. We never said he is a fanatic; we never said that. If others say he is, that is their view of him. We are happy that the General himself has not raised his hands to say ‘I am the one you’re referring to.

APC have been consulting and meeting with various stakeholders both within and outside to decide what mode to adopt their presidential candidate.

While Buhari prefers a consnsus arrangement, Atiku would rather have a modified primary elections.