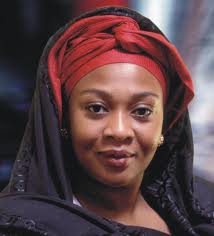 Former Senator representing the Kwara senatorial district and daughter of late kwara political leader, Gbemisola Rukayat Saraki, on tuesday declared her intention to run for the governor of the state under the People’s Democratic Party (PDP). THISDAY reports.

It will be recalled that Gbemi went against the will of her brother , former Governor, Bukola Saraki when contested the last governorship election on the platform of the Allied Congress Party of Nigeria (ACPN). S he eventually lost to the incumbent governor of the state, Alhaji Abdulfatah Ahmed.

Gbemisola  in a letter of intent written to the state chairman of PDP, Hon. Iyiola Oyedepo, in Ilorin  dated October 6, a copy of which was made available to journalists in Ilorin yesterday, said she wanted “to lead the state out of its present state of hopelessness and stagnation.¨

The letter also read “my aspiration is informed by the positive reactions received so far from majority of elders and stakeholders of our party and other members of the public during my state-wide consultation.”

“This decision is informed, on the one hand, by calls by family members, friends and several thousands of members of our party who are convinced about my capacity to lead the state out of its present state of hopelessness and stagnation which the ruling party has deliberately thrown it into.”

“Thus, in obedience of their clarion calls, and as a result of my personal conviction that Kwara State can be better governed, I have decided to offer myself to  the service of the good people of the Kwara state.

¨As an aspirant, I am under no illusion of how high the stakes are, I also know that we face an electorate that has been exhausted by broken promises, bad governance, collapsed infrastructure, an ailing economy, and a host of other problems that seem to defy solutions. But with God on our side, and the unalloyed support of our party, I believe I would bring my experience and connection to bear to salvage our dear state from the brink of collapse.

“I assure you that I am committed to free, fair and transparent primaries among my co-aspirants in the PDP.

“I must however be quick to commend the thoughtful decision of our party to exempt all female aspirants from the payment of the mandatory minimum  contribution levy among other concessions granted the womenfolk by the PDP. This is no doubt evident of the commitment of our party to the participation of women in the politics of Kwara State and Nigeria at large.”

¨Saraki however added, “Nonetheless, it goes without saying that I have indeed contributed to the party beyond the minimum contribution levy of N500,000 that other  gubernatorial aspirants have had to pay

It is however unclear whether she has her brother’s support for this latest ambition seeing she is not running on the platform of his party the APC.