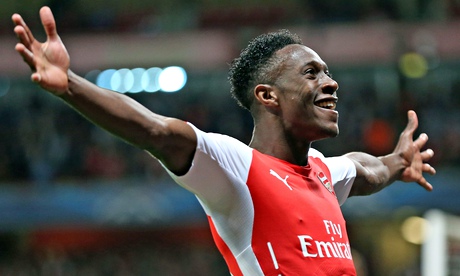 Former Manchester United striker, Danny Welbeck was on fire last night when he bagged a hat-trick as his team, Arsenal humiliated Galatasaray of Turkey, 4-1 in a Champions League match.

Speaking to SkySports after the game, Welbeck’s former team and United legend, Gary Neville stated that the Three Lions forward can be as great as Arsenal legend, Thierry Henry if manager, Arsene Wenger can repeat the magic he did with the Frenchman years back

“And then obviously the biggest thing, his centre-forward play for outside the box is sensational, his work-rate, his touch, it’s just that consistency of finishing and I think that will come from confidence and belief. It’s making sure that when he gets in that left channel he has a finish, when he gets one-on-one with the goalkeeper in a central area he has a finish.”

“He’s unplayable at times, he’s a nightmare. He plays against John Terry and Gary Cahill on Sunday – they will not want to play against him. He’s quick, he’s strong, it’s just the last bit has got to be delivered more consistently.

“What Arsene Wenger did when Thierry Henry came to Arsenal, people forget at Monaco… I played against him as a 17-year-old, he was very raw, he played as a left winger… in fact his control was poor, he wasn’t a goalscorer in those early years, however when he went to Arsenal it just completely took off for him.