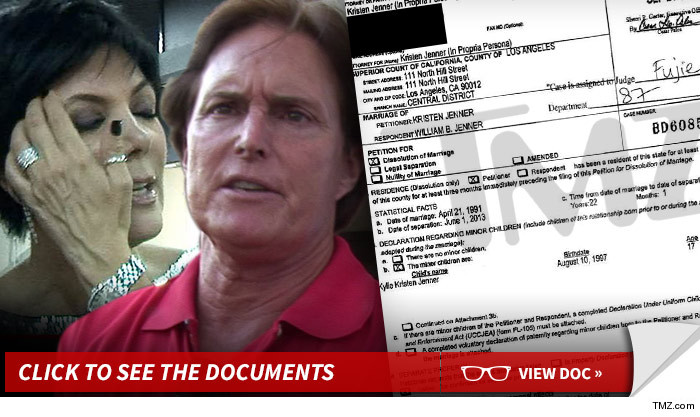 Kris Jenner has filed for divorce, and TMZ has learned it’s already a done deal for the E! reality stars.

Kris filed pro per — meaning NO LAWYER. Our sources say this was all orchestrated. Bruce Jenner’s response is about to be filed at the L.A. County Courthouse.

She cites the standard “irreconcilable differences” as grounds for the divorce.

Everything has been worked out with their business managers … our sources say. There was NO PRENUP and they have already agreed to a property split.

Neither party will get spousal support. As for Kylie — who is 17 — they have joint custody.

Bruce, Kris and their managers worked out the deal over the last few months.

They separated June 1, 2013. That’s significant because once they’re separated they don’t continue to share earnings — in other words, what’s hers stays hers after separation.