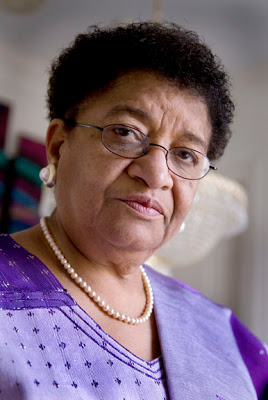 Liberia’s Ministry of Foreign Affairs, which is also the seat of the Liberian presidency, has been hit by the deadly Ebola virus. FrontPageAfrica has learned.

On Monday, the Administrative Assistant to Foreign Minister Augustine Ngafuan reportedly died from what sources say is a suspected case of the deadly virus. Her husband, a staffer in the office of President Ellen Johnson-Sirleaf, is currently under quarantine, according to online news portal, FrontPageAfrica.

The names of the officials were withheld because the government has not officially notified the public about the cases, so close to the Liberian presidency. Minister Ngafuan’s office is two floors below the floor now being used as the President’s office, the online news portal stated.

The wife of the President’s office staffer reportedly died on Monday and may have contracted the virus from a sister, who had previously died. A praying woman who reportedly had sessions and laid hands on the sister of the deceased Administrative Assistant, has also died.

Sources within the Executive Mansion informed FrontPageAfrica Wednesday that both the deceased Administrative Assistant in Minister Ngafuan’s office and her husband had been told not to return to the office until after 21 days.

“They had not been coming to work for more than 21 days now,” the source, speaking on condition of anonymity because they were not authorised to speak on the matter.

Minister Ngafuan is currently in Addis Ababa, Ethiopia attending an Emergency Meeting of the African Union’s Executive Council on the Ebola Virus Disease Outbreak. Attempts to reach the minister and his press aide have been unsuccessful.

The AU members are recommending the urgent lifting of all travel bans imposed on countries affected by the Ebola outbreak in Africa.

The Ministry has been the seat of the presidency since 2006 when fire gutted the fourth floor during celebrations marking the 159th Independence Day celebrations in the presence of three West African leaders, who had come to witness the then newly-elected President Ellen Johnson-Sirleaf switch on electricity to reach limited parts of the capital city.

South African forensic scientists brought in to probe the cause of the fire said it was an electrical fault. Following the fire outbreak at the Executive Mansion, the Government of Liberia announced a closure of the Mansion, and President Johnson-Sirleaf relocated to the Ministry of Foreign Affairs, where the president has for the past eight years been performing official state functions.

The mansion was constructed in 1964 under the regime of the late Liberian President William Vacanarat Shadrach Tubman by 2,000 workers, including about a fifth of Monrovia’s labour force, and 150 foreign technicians. The eight-storey Executive Mansion building, which costs US$20 million, has an atomic-bomb shelter, an underground swimming pool, a private chapel, a trophy room, a cinema, an emergency power plant, water supply and sewage system, among others.

The report comes just 24 hours after Defence Minister Brownie Samukai told the U.N. Security Council that the outbreak poses a “serious threat” to the war-torn nation’s very existence. Samukai’s words were echoed by the U.N. Secretary-General’s special representative Karin Landgren, who said Liberia is facing its gravest threat since its decade-long civil war ended in 2003. She deemed the outbreak a “latter-day plague” and its spread “merciless.”
Liberia is worst hit among the nations affected by the current Ebola epidemic with at least 1,200 recorded deaths. Over the past three weeks, the country has experienced a 68% bump in infections and the World Health Organization estimates the surge will continue to accelerate in coming weeks.
Humanitarian groups in the country have been complaining that there simply aren’t enough beds and suspected victims of Ebola are reportedly turned back to their communities or left waiting outside medical facilities, aggravating the risk of further contagion.

At least 160 health workers have been infected with the virus and 79 have died, in a nation that counted a paltry single doctor per 100,000 inhabitants at its onset. Landgren pointed out that the challenge also goes beyond the medical response.

“The enormous task of addressing Ebola has revealed persistent and profound institutional weaknesses, including in the security sector,” she said.
“As the demands pile on, the police face monumental challenges in planning and implementing large scale operations.”

Meanwhile, the Bill & Melinda Gates Foundation pledged $50 million on Wednesday to support emergency efforts to contain West Africa’s Ebola epidemic, which has already killed almost 2,300 people in the worst outbreak of the virus in history.

The U.S.-based philanthropic foundation said it would release funds immediately to U.N. agencies and international organisations to help them buy supplies and scale up the emergency response in affected countries.

It will also work with public and private sector partners to speed up to development of drugs, vaccines, and diagnostics that could be effective in treating Ebola patients and preventing further spread of the haemorrhagic fever-causing virus.

“We are working urgently with our partners to identify the most effective ways to help them save lives now and stop transmission of this deadly disease,” Sue Desmond-Hellmann, the Foundation’s chief executive officer, said in a statement.

Latest data from the World Health Organisation (WHO) show the Ebola outbreak, which began in March, has infected almost 4,300 people so far, killing more than half of them.

The deadly viral infection is raging in three countries – Guinea, Liberia, Sierra Leone – and has also spread into neighbouring Nigeria and Senegal.
The WHO said on Tuesday the Ebola death toll jumped by almost 200 in a single day to at least 2,296 and is already likely to be higher than that. It has previously warned that the epidemic is growing “exponentially” and there could be up to 20,000 cases in West Africa before it is brought to a halt.

Chris Elias, the Gates Foundation’s head of global development, said in a telephone interview the group would be assessing over coming days where funds could be best spent.

Some would go to the most acute and immediate needs, he said, and some would be put towards more longer-term research into treatments and ways of preventing future outbreaks.

“The spread of this disease has really happened because of the very weak health systems in these very poor countries,” he said. “We need to be thinking how we can build up those health services, how we train healthcare workers, and how we make sure they have the equipment they need to do their jobs.”

The Gates money comes after the British government and the Wellcome Trust medical charity last month pledged 6.5 million pounds ($10.8 mln) to speed up research on Ebola, a disease for which there is currently no licensed treatment or vaccine.

The WHO has backed the use of untested drugs, as long as conditions on consent are met, and is hoping for improved supplies of experimental medicines by the end of the year.
Britain’s minister for international development, Justine Greening, welcomed the Gates support, saying the “serious health, social and economic risks posed by one of the worst outbreaks of the disease require the entire international community to do more to assist”.

The Gates Foundation – set up by the billionaire founder of Microsoft Bill Gates to fight disease and poverty in poor countries – has already committed more than $10 million to fight the Ebola outbreak, including $5 million to the WHO for emergency operations and research and development assessments and $5 million to the U.S. Fund for UNICEF to support efforts in Liberia, Sierra Leone and Guinea.

In its statement, the foundation said it would also give an extra $2 million immediately to the U.S. Centers for Disease Control and Prevention (CDC) to support incident management, treatment, and health care system strengthening.