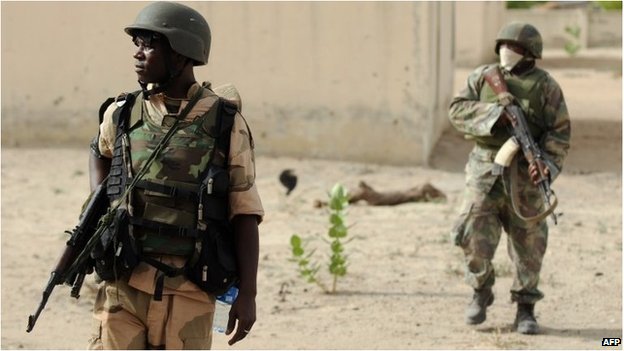 The 7th Divisional headquarters of the Nigerian army has imposed a dusk-to-dawn curfew in Maiduguri, Borno state capital. The curfew will persist until further notice according to a terse announcement by the army.

The army reportedly took the action to forestall a plot by Boko Haram militants to seize Maiduguri; a plot earlier revealed by SaharaReporters.

Nigerian troops are currently battling the militants in Bama some 40 miles from Maiduguri.

Meanwhile, thousands of Nigerians have been forced to flee their homes, swamping towns in the north of neighbouring Cameroon, authorities said yesterday.

This came as Boko Haram terrorists, for three days, laid siege to Gamboru town, forcefully conscripting children and youths to fight both the Nigerian /Cameroonian troops. They were said to have killed those who resisted them.

After the three-day attack, 29 persons were killed, while 215 of the youths, who fled to Cameroon to escape the forceful conscription, have recounted their ordeals in the hands of the insurgents.

A Cameroonian police officer told AFP on condition of anonymity that: “We’ve been flooded here in Mora by Cameroonians and Nigerians fleeing Boko Haram. The day before yesterday (Friday), there were already more than 10,000 people in Mora. Not a day goes by without more people coming.”
The number of internally displaced people in Nigeria and those who have crossed its borders into Cameroon, Niger and Chad because of the militant violence has been increasing, with no end in sight to the insurgency.

The United Nations’ humanitarian office (OCHA) said on August 5 that Boko Haram attacks have forced nearly 650,000 people from their homes in the North-East states of Borno, Yobe and Adamawa.

The National Emergency Management Agency, NEMA, has said that nearly 11,500 fled Gwoza, also in Borno State, when militants seized the town on August 7. Boko Haram has since declared Gwoza part of an Islamic caliphate.

The Cameroonian police officer said registration of the displaced persons had begun in Mora, while the nearby town of Kolofata had seen more than 6,000 arrive.